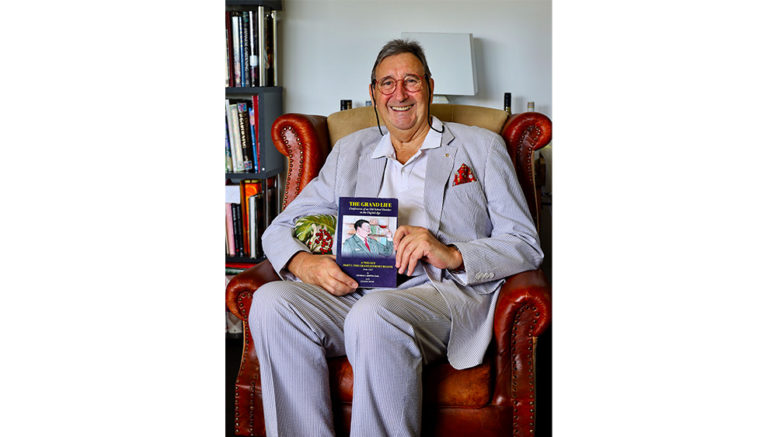 Patrick Griffin OAM with his book, The Grand Life: Confessions of an Old School Hotelier in the Digital Age

What started as a quest to write a bucket list has now turned into an internationally selling book for Patrick Griffin.

The West Gosford local recently released The Grand Life: Confessions of an Old School Hotelier in the Digital Age, a three-part book series documenting his time working in luxury hotels all over the world.

His career has spanned fifty years as a hotelier in Grand hotels across the UK, Europe, and Australia.

During that time, he has met 16 royals, four presidents, more than 60 actors, 36 rock stars, 40 famous sportsmen and women, and over a dozen politicians.

He said he started writing the book seven years ago whilst lying in hospital with a chemo drip in his arm.

“At the time, the prognosis was not good; it was looking around eight months,” Griffin said.

“So I literally started to build my bucket list.

“Meeting famous people was another one, well the first famous person I ever met was Charlie Chaplin.

“Then I thought; God, what goes in this bucket list?

“I thought, what am I complaining about?

“I have had such a good life.

“I should be thankful.

“Rather than get all oh I’m going to die, I thought let’s write this down.

“So I started to write it, and it was fun.

“I loved every minute of it.

“I think it kept me positive.”

Born in 1946 in Rugby, England, Griffin’s early youth was spent in Swanage, Dorset, where the family had moved to escape the German bombing while their father served in the RAF.

Although not academically inclined, his charm, wit and unfailing ability to make lemonade when he was given lemons ensured his life was filled with adventures and hilarious mishaps.

His career started in 1963 as a trainee manager at The Grand Hotel in Eastbourne, a very traditional Victorian-era five-star hotel, where he found his passion for hospitality.

From post-war austerity and bureaucracy through the Swinging ‘60s and the ‘Summer of Love’ in Amsterdam to England’s industrial upheaval and ‘Winter of Discontent’ of the ‘70s, the memoir documents it all.

After moving to Australia, Griffin served 19 years as Managing Director of Orient-Express Hotels Australia, overseeing both The Observatory Hotel in Sydney and, until its sale in January 2010, Lilianfels Blue Mountains Resort.

In June 2009, he was honoured with an Order of Australia Medal (OAM) in the Queen’s Birthday Honours list for service to the tourism and hospitality industries, particularly through the Australian Hotels Association.

Unfortunately, Griffin continues to battle cancer but is still optimistic about the future and thankful for his life.

“Running luxury hotels, I’ve had some people come through who hated the world, sat there over their caviar and champagne, and thought oh I’m gonna die.

“I thought, you’re lucky to be sitting here in comfort, sipping champagne.

“You should enjoy life – make the most of it.”

The book can be purchased through www.patrickgriffin.info.