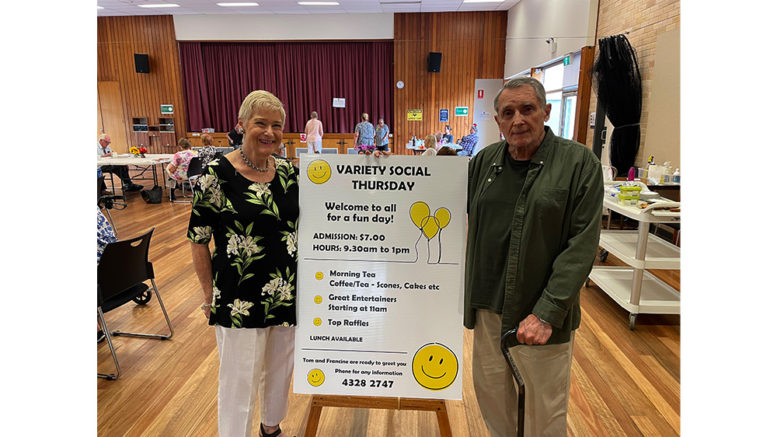 Thanks to Francine Redstone and Tom Brennan, for the past 15 years, Central Coast seniors have been boogying and jiving every week at the 50+ Leisure and Learning Centre in Gosford.

The couple runs Variety Social every Thursday from 9.30am-1pm for people aged over 50.

The day consists of a morning tea with homemade cakes cooked by Redstone herself, and a one-hour musical performance.

Entertainers are hired to play for an hour each week, thanks to both Redstone and Brennan’s music background.

Brennan is from America and came to Australia in 1972.

He auditioned for and joined the Australian Opera, as it opened the Sydney Opera House in 1973 with the Opera War and Peace.

Redstone joined the Opera a couple of years later and she and Brennan have been together ever since, singing and performing.

“We performed up here in the retirement homes and other places, so you get to know performers,” Redstone said.

“We also ask buskers we see on the Central Coast if we think they would do well for our event.

“Sometimes, if an entertainer cancels, Tom and I will fill in and perform instead.”

The couple funds the community event every week and rents the space from Central Coast Council.

They charge an admission fee of $7 each week to help pay for these expenses, the food, and the performer.

“Aldi gives us a donation of $50 each week, which has been a great help,” Redstone said.

Redstone said she knows how much this day means for so many in the elderly community.

“It lights up their day so much, they all give me cards at Christmas time, and the wording on them is so wonderful,” Redstone said.

“They say things like ‘thank you for the day you have put on, our lives would not be as fun with it’.

“Lots of these people have children who are elsewhere or busy, and they have not much to do.

“So, when they come to us, it is such a fun day, they laugh, and it takes their mind off things.

“They are all friendly, and they all love each other; we have a lovely community.

“The people I have got are gorgeous, so I will bend over backwards for them.”