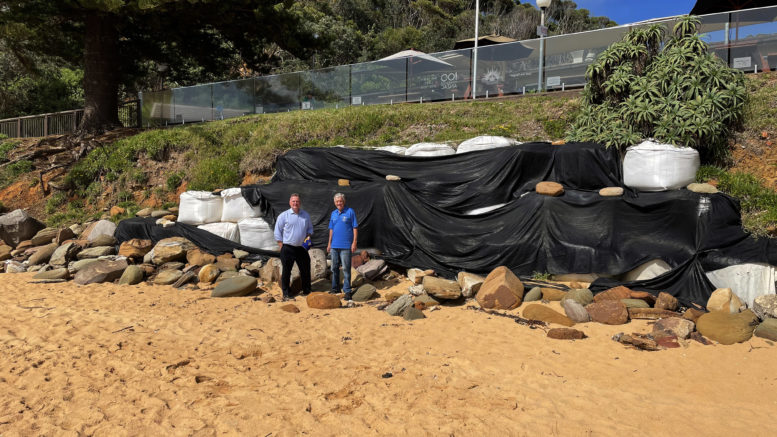 The crew at Macmasters Beach Surf Life Saving Club is delighted that the State Government has given a $320,700 grant to Central Coast Council to build a revetment wall at the popular beach.

The club’s Director Administration, David White, said the wall would be extremely important in the medium to long term.

“We have been working with Council for a few years now (on the matter) and are delighted that the State Government is going to provide the funds,” White said.

“A revetment wall at Macs is identified as high priority in the Coastal Management Plan but it needs to have the appropriate environmental and planning approvals.

“Council has commissioned environmental consultants to do assessments as a pre-cursor to approval of the works.

“The clubhouse is very close to the ocean and the soil that it sits on is fragile; it is very susceptible to erosion.

“It is particularly vulnerable to large seas during high tides.

“We had an occurrence four years ago where we lost a lot of the bank.”

Parliamentary Secretary for the Central Coast and Member for Terrigal, Adam Crouch, said the revetment wall would cover a 110 metre stretch of the beach in front of the club.

“This section of the coastline is rich in Aboriginal history and the revetment wall will have a dual purpose of protecting the multi-million-dollar community-owned Surf Club, while also providing long-term protection to an Aboriginal burial site,” Crouch said.

“The project has been designed by Central Coast Council in a way that accommodates the existing surf break, secures the future of the Surf Club and provides permanent protection of local Aboriginal heritage.

“I congratulate Council for receiving $320,700 as an outcome of its certified Coastal Zone Management Plan, and I look forward to the NSW Government supporting future funding applications that the Council submits.”

Minister for Local Government, Shelley Hancock, said the NSW Government was committed to supporting councils and communities manage unique coastal assets now and into the future.

Safety net in place for business landlord and tenants