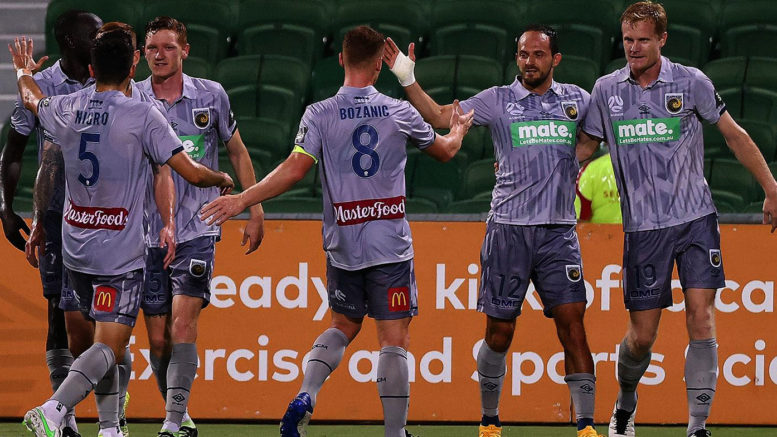 The Central Coast Mariners withstood a late charge to record a 2-1 win over Perth Glory at HBF Park on Tuesday, March 2, cementing their spot at the top of the A-League ladder.

2021 has been a season of records for the Central Coast side so far and this game was no different.

Going into the match having lost 24 of their last 25 games outside of NSW, as well as six of their last seven against Glory, the win was timely to say the least and has nestled the blue and yellow back to a four point lead over their nearest rival, Macarthur.

The opening goal came for front man Matt Simon in the 5th minute, a combination play between him, Daniel Bouman and Stefan Nigro with the ball in the air.

The initial cross from Jack Clisby met the head of the defending Glory striker, Bruno Fornaroli, who knocked it out of the box.

Nigro met the ball with his own head and lobbed it back into a dangerous area in front of goal.

Bouman angled it to Simon, who found the space to take it on his chest then calmly swing his leg through it across goal into the back of the net.

This early stab marked another record, being the earliest goal for Glory to concede at HBF Park in the A-League.

The Mariners found confidence forcing Glory to chase and the hosts responded, causing Mariners to break their lines in the midfield and track back to cope with several counter-attacks.

Despite this, Glory found few opportunities to test Mariners keeper, Mark Birighitti, who always looked sure of his positioning, cutting out a number of the Glory crosses that became the team’s primary avenue toward goal.

A 23rd minute hand ball scare may have given Mariners defender, Ruon Tongyik, painful flashbacks to their last match against Adelaide.

A zipping, low cross from Nick Sullivan appeared to be fending away from Birighitti onto Tongyik’s hand, immediately causing the rambunctious Perth supporter base to boom with dissent as the game played on, and soon a ‘VAR’ chant filled the stadium air.

The VAR check did come, and the on-field decision was upheld, a welcome relief for the Mariners after the controversies of the technology last week.

With the momentum turning towards Glory who were maintaining midfield dominance in possession and passing accuracy, it was Mariners man, Marcos Ureña who found a goal against the flow of play.

It was another set-piece goal for the Mariners, with Daniel De Silva’s cross from outside the corner of the box meeting Ureña largely unmarked a foot away from goal, allowing the experienced attacker to head the ball into his near side.

For Ureña, the 40th minute goal opened his account, both for the Mariners and in the A-League and will look to many more over the coming weeks.

More opportunities came in the second half for Simon and De Silva, but without success.

In the 65th minute, Fornaroli finally found the net off the side’s first successful cross after many attempts.

Fullback, Kosuke Ota who crafted the ball into the box, finding Fornaroli in space and when he netted the ball the prospect of a home team come-back was very much on the cards.

The opportunities kept coming for both sides, with an overload of Glory possession and attack in the final 15 minutes against a Mariners defensive structure that remained firm.

After an eternal five minutes of injury time, final whistle blew and the Mariners had a well-deserved 3 points.

Next up for the Mariners is Macarthur at Central Coast Stadium on Monday, March 8.

This first verses second match-up is shaping as a season shaping event, with Macarthur having the opportunity to come within a point of the leaders, or alternatively, for the Mariners to shoot seven points clear in top spot.