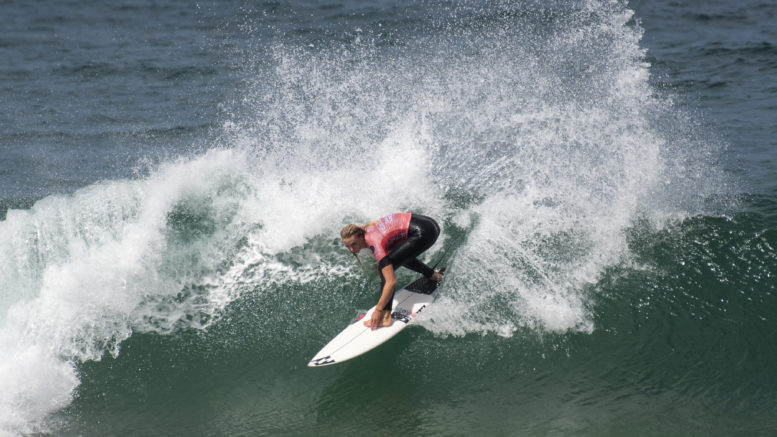 The Vissla Central Coast Pro launched at Avoca Beach on Tuesday, March 2 and brought with it the opportunity for Central Coast surfers, both veterans and newly rising stars alike, to find their feet in the home-bound World Surf League (WSL) competition.

The event opened with the appearance of high profile elite surf coach Glenn ‘Micro’ Hall from Umina surfing his first WSL heat in over five years.

The powerful goofy footer showed all he has maintained the skills that saw him compete on the elite Championship Tour in 2015 and 2016.

“It was fun to put the jersey back on and compete again.

“It’s about getting out there and doing my best, it’s not about winning and it’s a good opportunity while here at my home beach.

“Don’t worry, this is not a comeback,” laughed Hall after his win.

Despite the old boy’s words, his performance saw him advance through the first three rounds on Day One, leading to a match up to come later in the week against his team member and fellow local, Adrian Buchan in Round Four.

“There’ll be no favours going Adrian’s way in that heat, maybe he can give me a few,” added Hall.

As well as Hall, former event champion from Shelly Beach, Shane Holmes, revelled in the increasing surf of Tuesday.

The powerfully built local Central Coast surfer also won his way through Rounds One, Two and Three today with a style focused on big powerful moves.

“I have not competed since this event last year and it is so good to be back and doing what we all do best” said Holmes.

“It’s good to be surfing in my local region and with this swell on the increase I feel good and confident I can keep advancing.

“Let’s see though, the field is extremely strong with some great top seeds.”

Two more Coasties took this opportunity to shine in their Round One heats, these being Great Lakes Pro winner, Molly Picklum and Avoca Beach local, Macy Callaghan.

Picklum, who is coached by the aforementioned Micro, appeared very comfortable in the rugged conditions, winning her heat with a solid 14.90 two-wave total.

After already finding gold in this Vissla NSW Series, and currently sitting in second place on the WSL APAC Qualifying Series rankings, the Shelly Beach natural-footer looked hungry to launch herself into the top spot above current rankings leader Bronte Macaulay.

“The waves were so much fun out there and I just felt like I wanted to keep surfing,” said Picklum.

“I surf here quite a bit with my coach, Micro, so I’d say I’m reasonably confident with the way the beach breaks.

“I also think having Micro still in the event and watching him surf yesterday really inspired me to do well.

Late in the day came Callaghan who won her heat with a two-wave score of 16.35, including a final 8.85 wave score to launch herself well above second place, Arabella Wilson.

“It’s my home and this is the surf I grew up in, so it’s just a great event for me to fine tune before Newcastle.

“I’ve set goals for this year now that I’ve surfed the CT for the past few years and I’d really like to push my way into the top 10 – It’s exciting to be back and competing.”

With the competition scheduled to go ahead with finals to be had throughout the weekend, the week will involve plenty of world class surfing to witness from locals, Aussies and Internationals at Avoca Beach.