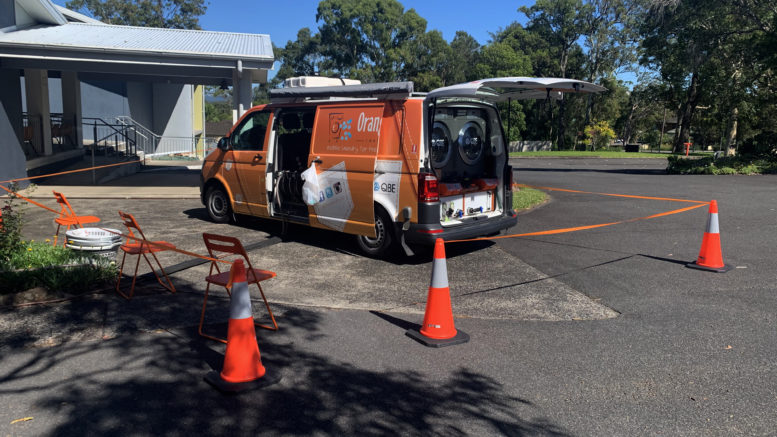 Orange Sky Australia, the world’s first free mobile laundry service for people experiencing homelessness, is back up and running on the Coast.

Launched in Brisbane in 2014 to improve hygiene standards and restore dignity to locals doing it tough, Orange Sky Australia has since grown to operate at 31 locations around Australia and washes around six tonnes of laundry a week, whilst also providing thousands of hours of community building conversation with users.

The one-of-a-kind service has been operating on the Central Coast since 2017, with a small but dedicated team of volunteers taking the Coast’s own mobile laundry van, affectionately known as ‘Tumbles’, up and down the Coast.

In March 2020, the organisation was forced to pause its services in response to the pandemic, but now Orange Sky is back and while it may take some time for things to feel normal again, Central Coast volunteers aren’t throwing in the towel.

“We are currently operating at multiple locations around the Coast from Tuesday to Thursday and are excited to be back and reconnecting with all our friends who utilise the service,” said Orange Sky’s Service Leader Central Coast, Kylie Gough.

According to Gough, the Central Coast service was bouncing back after its suspension, with volunteers and service users, both adjusting well to new COVID-safe measures.

“Tumbles has been fitted out with anti-bacteria gel and wipes and all of our volunteers now wear latex gloves and have the option to wear a face mask.

“We also tape off a 3m area around the van and ensure 1.5m social distancing occurs when our friends sit down for a chat while they’re washing is done, and all equipment is regularly cleaned and sanitized,” Gough said.

But despite the changes the Central Coast service is booming, with dozens of new users seeking Tumbles out.

Gough puts this down to economic and housing stress resulting from the pandemic, with volunteers seeing the aftermath of massive job losses in the region.

“We have noticed a definite increase in the amount of friends who utilise the service and what we are hearing from a lot of these new users is that they’ve come into hardship after losing their job, they’re not necessarily homeless, but they don’t feel secure either.”

Thankfully the surge in need has come with a surge in those willing to give, with Gough happy to report that local volunteer numbers had also grown since the service resumed.

“We have around 57 volunteers here on the Coast.

“Many aren’t active yet as they need to complete their training, but it’s great to have so many wonderful and enthusiastic people keen to volunteer and make a difference.

“Many of our returning volunteers have also been thrilled to reconnect with old friends and catch up on how they’ve been.

“Likewise, so many of our friends, new and returning, are so positive and happy to have the service back up and running, and it does just make you feel hopeful,” Gough said.

And that hope could soon awash the Coast, with Orange Sky keen to expand it’s offering in the region.

“Part of our plan to rebuild in 2021 is to bring the number of shifts up and to create new ones.

“I’d also like to get shifts running on weekends and we’re aiming to try and have at least 2-3 shifts going each day, but that means we need more volunteers and more community partners willing to host Tumbles,” Gough said.

In the former Wyong Shire, Orange Sky is actively washing at Wyong Neighbourhood Centre Inc. on Tuesdays between 10:30am and 12:30pm and at Lakes Anglican Church at Kanwal on Wednesdays between 9am and 11am.

Former Gosford Shire locations are Pass It On Clothing at Gosford on Wednesdays between 6:30pm and 8:30pm and Soul Soup at Woy Woy on Tuesdays between 5:30pm and 7:30pm

More locations are expected to be announced in the coming months.