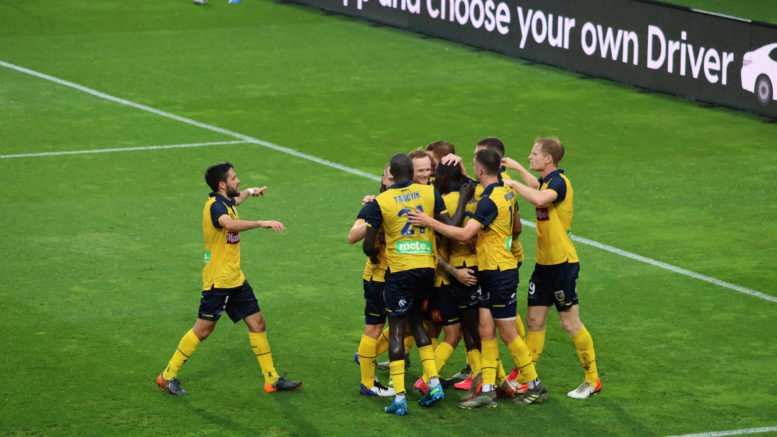 A dominant showing by the Central Coast Mariners at Wollongong Stadium has earned them a comfortable 2-0 win against Wellington Phoenix.

The victory has come as a great relief for the Mariners, who have now broken Phoenix’s unanswered, six-game winning streak against them and established their highest season win count since 2014.

As well as this, after a busy early February schedule with two close-encounter comeback wins, the boys in yellow were rewarded with another clean sheet after effecting a game-plan that saw them dominate possession, territory and shots on target.

Early on, the Mariners were fortunate to benefit from a reckless, studs-up diving challenge on Matt Simon by Phoenix attacker, David Ball, that earned him a red card in the 27th minute.

Nonetheless, the Mariners responded with patience, maintaining their shape and stifling their opposition’s chances to attack, exploiting their lack of a strong target man in the box.

In attack, the Mariners began to find opportunities to test Phoenix goalkeeper, Stefan Marinovic. Oliver Bozanic had a long shot on target, making use of the opening up space in the midfield, before Matt Simon found the back of the net in the 40th minute.

The perfectly weighted through ball came from Marco Ureña, capturing Simon lurking in between the centre-back defenders.

Simon lined himself up against Marinovic, one on one, and simply drove the ball across goal into the far, bottom corner.

A VAR check after the goal confirmed the on-field decision, and Simon was awarded his third goal in three games.

The pressure continued to mount for Phoenix with the beginning of the second half, with another mistake coming from the centre-defensive position leading to a conceded penalty goal in the 50th minute.

An un-cleared ball played hot potato in front of Marinovic’s goal until the loose foot of Te Atawhai Hudson-Wihongi clipped De Silva as he cut in onto his left side.

Surprisingly, captain Bozanic stepped up to do the business and swung the ball high into the top corner, marking both his first penalty goal in the A-League and the opening of his 2021 account to make the score 2-0.

In a strong position, the Mariners continued to maintain their steady control over the ball and defended with a high press against their thinly spread opposition.

The incisive passing play of Ureña nearly fed Simon in for his second only a couple of minutes after the team’s second goal.

Again, the striker had an opportunity to double his game-day goal tally after a high pace passing attack ended in Bozanic feeding him unmarked in front of goal, but it was not to be.

In the end, the score remained 2-0 after a successful afternoon for the Mariners in stifling Phoenix’s goal-scoring potential.

The Central Coast league leaders now find themselves four points clear on top of the table ahead of their next match against eighth place Adelaide United, at Hindmarsh Stadium on Friday, February 19.