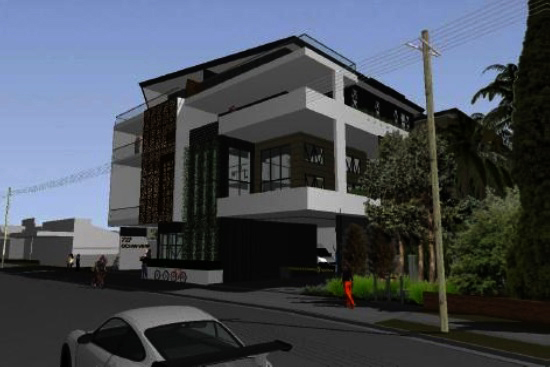 A proposal for a six-storey mixed use development at Ettalong Beach has been refused by the Central Coast Local Planning Panel, despite a Council recommendation for approval and to the bewilderment of Peninsula Chamber of Commerce and development representative Alex Bishop of Jedaclew.

The development, which would have comprised 25 units (one, two and three-bedroom) over five storeys and commercial space on the ground floor, was proposed for 227-233 Oceanview Rd.

The proposal requested a 14.1 variation to height guidelines.

A previous application for a similar development on three of the lots was withdrawn in July 2019, with the latest DA including an additional lot (four lots in total).

A total of 67 submissions were received, complaining – among other things – about the proposed demolition of two historic buildings, which could be traced back to the earliest settlement of Ettalong Beach.

Objectors urged Council to reject the development because it was outside planning guidelines and not in keeping with the village character of the area.

But Council recommended approval, saying the buildings were not listed as items of environmental heritage under local or state provisions.

It considered the proposed development reasonable and appropriate for the site and in keeping with the desired character for the area and existing recent developments in a precinct which was “in transition”.

Despite Council’s recommendation for approval, the Panel voted three-one for refusal.

The Panel found that the applicant failed to adequately address clauses in the Gosford Local Environmental Plan 2014 sufficient to justify departure from height restrictions.

The Panel said the proposed development was not consistent with the objectives for development in the B2 Local Centre zone and that an adequate range of retail, business, entertainment and community uses was not provided.

Concerns were also raised that the development would isolate an adjacent site and could diminish development potential of that property.

The Panel also said the development provided poor amenity for future residents and visitors and would have adverse impacts on neighbouring low density residential properties.

The application was refused with a three-one vote, with Panel member Stephen Leathley favouring approval.

Proponent Alex Bishop said he was “bewildered and disillusioned” by the decision.

“The process with Council has been quite onerous and over a two-year period we have liaised with and listened to Council advice to make this development stack up,” he said.

“We have used certain design principles to overcome a slight increase in overall height and the only thing affected is the lift overrun and the roof space, which is not visible at street level.

“These are very, very minor in regards to total building profile.

“The lift overrun represents 0.65 per cent, less than 1 per cent.

“There is not much else we could have tried to achieve here to alleviate community concerns.

“The usual big ticket items are well and truly addressed.

“A total of 594m2 (30 per cent of total site) of deep soil zones are provided at ground level compared to a design criteria/objective of 7 per cent.

“This represents 400m2, or the equivalent of five good size two bedroom units.

“This development was designed by locals and aimed at a market that will embrace the local community and everything that is on offer.

“We are targeting people who want to buy into a smaller less intrusive development on the township fringe.

“What I ultimately do not understand is that after we resubmitted a revised DA after consolidating an adjoining lot, adhering to Council’s concerns and through a long tenacious process coming up with a DA recommended for approval that achieved all of Council’s criteria and objectives for Ettalong, we subsequently had a planning panel ignore all the advice from all the professional staff involved in the process

“Ettalong is dying and needs rejuvenation between the ferry terminal and the township and that is what this development is ultimately trying to achieve.

“It is that simple; bringing people back to the shopping strip, living very close to amenity, is a good result.

“This infatuation with granny flats and villas has got to stop.”

“This is a good development which clearly reflects a trend for high density accommodation in Ettalong,” Wales said.

“Interestingly the application was supported by Council staff and recommended for approval and it was also supported by the Panel’s own expert planner.

“These are the sorts of development we need that create jobs and investment.”

Bishop said he would be investigating a decision review process.