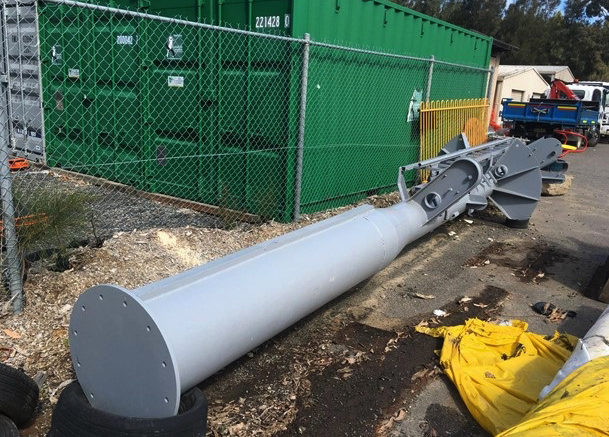 The HMAS Adelaide mast is waiting for its new home

Nine years after it was gifted with the mast of the former HMAS Adelaide, Central Coast Council has finally lodged a development application (DA) for its installation at Terrigal Haven.

The $50,000 project would see the mast installed onto a plinth footing, surrounded by a sandstone retaining wall, garden bed and an access path linked to an existing car park at the Haven.

The proposed site is at the “Broken Head” headland southern cliff-top (above the dog leash area), close to the Marine Rescue Centre.

The site has a direct view of the buoys over the site of the Ex-HMAS Adelaide, which was scuttled in 2011 to become an artificial reef and dive site.

The project is funded by the NSW Stronger Communities Fund, the NSW Government Minister’s Discretionary Fund, the community and in kind contributions from Thales and associates and Council.

Built in the United States, HMAS Adelaide was commissioned in November 1980 and was the first of six Adelaide-class guided missile frigates to be delivered to the Royal Australian Navy.

Decommissioned in 2008, HMAS Adelaide was demilitarised by the Department of Defence before being handed over to the NSW Government in 2009.

Since being scuttled 1.8km off the coast between Terrigal and Avoca, the site has attracted military historians and recreational divers to the area.

The mast was gifted to Council with the intention it would form part of a future memorial at the Haven, is 7.4 metres in length and 450 mm in diameter and has been stored by Council since 2011.

In 2015 the former Gosford Council CEO agreed to project manage the installation of the mast on behalf of a community group.

In 2016, the mast was assessed by the Navy and deemed to be in poor condition.

The recommendation was to seek specialist treatment, including a sandblast and painting.

The mast is now structurally sound.

On May 14, 2018, Council considered a report detailing options for the site and installation of the mast.