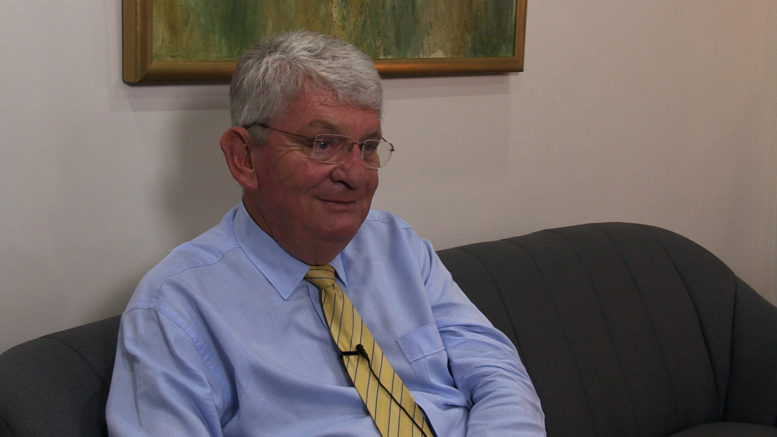 In an exclusive interview with Central Coast News, Persson elaborated on his recently tabled 90-Day Report in the wake of a protest against a possible rate rise outside Gosford Chambers prior to the meeting on February 3, during which he was berated by an angry crowd before handing down the report.

“I asked the 50 or so protesters how many of them had actually read the (preliminary) 30-Day Report and it was pretty disappointing that only a third of them had done so,” he said.

Persson said many protesters were surprised to learn that a 15 per cent rate rise would see residents of the former Wyong Council area actually paying around $3 less per week, following harmonisation with Gosford rates.

“It was put out as an interim report.

“The three-month report brings the community up to date with where we’re at but as it turns out not much has changed.”

Persson said he had attempted to explain in “plain English” what went wrong and who is responsible for Council’s financial crisis – and that was largely the former CEO and Chief Financial Officer and Councillors.

Persson said that while Council had an accumulated debt of $565M, it was important to note that when the former Gosford and Wyong Councils merged, they already had a debt of $314M between them, largely due to inappropriate access of restricted funds.

“The debt is not good but it’s not the problem,” he said.

“But $45M of that will be one-off payments as (around 300) staff members leave the organisation, so that leaves (a loss of) around $70M in ongoing terms.

“We need to have a surplus to repay debt and (initiate) new projects so we have to find $70M plus another $10M for surplus.

“If we do nothing than that $70M will get bigger as wages are growing faster than rates and that is not sustainable.”

Persson said without the estimated $26M from a 15 per cent rate rise (yet to be approved by IPART), the damage to the organisation would be “irreparable”.

“Well-intending community advocates don’t necessarily have that appreciation,” he said.

“At the time of the merger, Wyong rates were higher than Gosford’s and the government said we couldn’t alter that for three years,” he said.

“So even with no increase, Gosford’s rates would be going up (as rates are harmonised).”

With a 15 per cent rate rise, Gosford rates would rise an average of $8 per week.

“I know this is tough for some in Gosford and we will do everything we can to soften the blow,” he said.

Persson reiterated that the financial situation was not caused by the merger, which he said was a “peripheral factor”.

He said changes to water and sewerage charges mandated by IPART took around $40M off the revenue line and Council had failed to harvest savings opportunities presented by the merger.

The proposed sale of Council assets would help alleviate the debt he said, but it would be no fire sale.

“We won’t sell something for less than its value,” Persson said.

“If the market’s not right for that asset we will not take a lower price.”

He said the establishment of an independent committee to advise on asset sales was important.

With the Gosford Chambers and surrounding Council owned assets high on the prospective sales list, Persson said he was willing to hear people make a case for retaining particular assets, and that he had already taken off the list assets earmarked for social housing and one intended for a community centre.

But there was a limit to how much could be taken off the table, he said.

He said it was hoped $40-$50M could be raised through asset sales over the next few years.