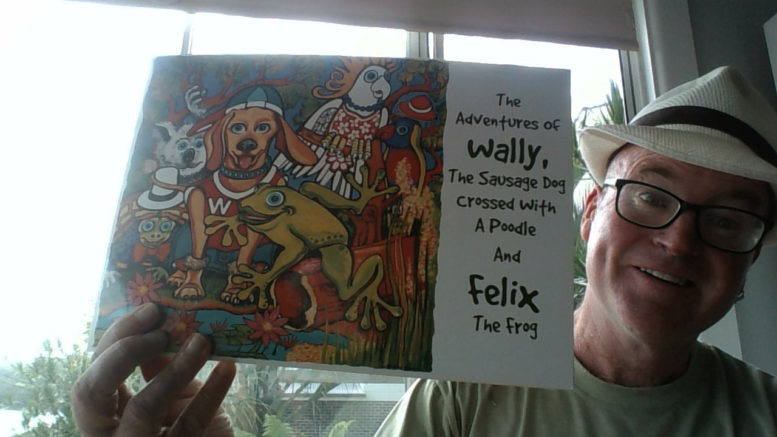 Brett Finneran with his children’s book, The Adventures of Wally, the Sausage dog crossed with a poodle and Felix the Frog

But after being declared cancer-free, all that changed.

The Saratoga local is a reformed “brain tumourist” and the author of the children’s book, The Adventures of Wally, the Sausage dog crossed with a poodle and Felix the Frog.

Finneran said he became interested in poetry after his treatment when he joined The Australian Teenage Cancer Patients Support Association, Canteen.

“It all came about when I joined Canteen and I suddenly found an urge to write poetry about people and things in general,” Finneran said.

“It’s not the conventional type of poetry; it ranges from sentimental to sarcastic, nice days, things in general.”

In December 1988, Finneran was diagnosed with a brain tumour which left him in hospital for five months receiving chemotherapy.

After a relapse in May and one more month of chemo in February 1999, he was able to declare himself tumour free, but poor hearing, epilepsy, hormone disturbances, arthritis and some speech problems are some of the side effects he has from the tumour and radiation.

“[Poetry] is the best way I can spit things out a lot of the time,” Finneran said.

“I have a bit of trouble spitting out words these days so it is the best way I can spit out a lot of things.”

The book’s inspiration came from his brother’s dog, Wally, who disappeared one day and never returned.

He self-published it in 2006 and has since sold over 800 copies to places all over the world.

“The book consists of 16 different stories about the adventures of Wally and Felix.,” he said.

Finneran hopes to show others that brain cancer is not a death sentence and although there may be subsequent side effects, not all of them have to be negative.