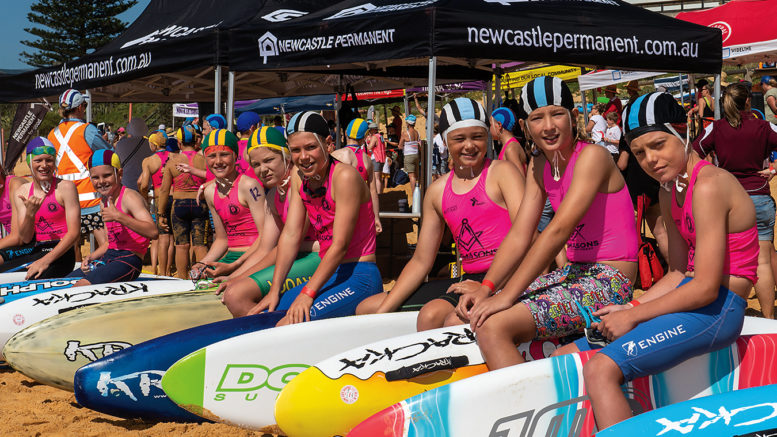 The 2020/2021 Newcastle Permanent Junior Ironperson Series came to its conclusion on Saturday, January 23 at Ocean Beach Surf Life Saving Club, with clubs from all over the Coast competing for gold.

The Series lasted over three rounds, with over 240 registered athletes between U10-U17 years competing with more in the U19/Opens and 30 plus years.

Points were tallied based on ending position across the Series, making up an overall total to decide on each division’s winners.

In the final round of the series, Ocean Beach produced small conditions that tested the fitness of all competitors.

Among the local clubs, it was Umina Surf Life Saving Club who stood out with multiple wins across the age groups.

In the Female U11s, Umina’s Amber-Skye Stevenson finished off the Series with a perfect score having won all three rounds.

Later in the Female U14s, there was nothing to separate the two Umina competitors Sienna Scahill and Hannah Stevenson on the overall points board, with Hannah winning on the day and Sienna finishing second.

Hannah went into the round a point behind her fellow club member Sienna, who had maintained her lead after a Round One win.

Archie Rayner of Umina won overall in the Male U15s, maintaining his strong lead after a win and second place in Round One and Two, but it was Terrigal Surf Life Saving Club’s Jett Green who won Round Three.

The next race was the Female U17s, which was won by Umina’s Poppi Lever both on the day and overall.

In the second last race of the day, the Female 30 years plus, Jenni Darwin earned Umina its last medal with her first race day win and the overall lead on total points.

As well as being a hotly contested sport series, the Newcastle Ironperson is also a chance to support emerging lifesavers by testing their skills across a number of physical challenges.

All the races were hard fought by competitors of all ages and was a testament to the Central Coast’s overall dedication to maintaining the highest standard of Surf Lifesaver.

Lifesavers in the making