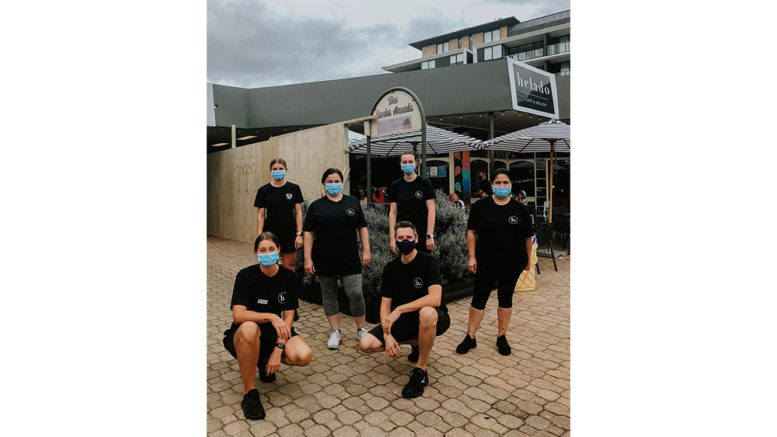 The Helado team and the newly constructed wall

A 3-metre high timber wall has been constructed in front of a popular set of shops in The Rocks Arcade at Ettalong Beach, leaving local businesses and community members scratching their heads.

Owner of Helado Cafe, Chris Perkins, said they had no knowledge of the construction until they discovered the newly built wall outside their café on January 20.

“I don’t know what the idea behind the wall was, we have always stayed within our lease,” Perkins said.

“When you walk down the street, the café has kind of become invisible and (it) has also limited the amount of seating I can place there because it’s encroaching into our space a little bit.”

The Memorial Ave arcade was purchased by a developer with plans to demolish half of the site, making space for a five-storey hotel equipped with function facilities, a roof-top terrace bar and swimming pool.

These plans were approved by Central Coast Council in May 2020, with construction costs estimated at $18.58M.

Before the approval, the proposed hotel and DA application had 45 objections, with concerns the building exceeded its maximum height requirements and had insufficient car parking.

Perkins said they assumed the wall had been constructed to directly impact their business, with their café standing in the way of the developer’s demolition plans.

“The only motivation that we can see for its construction is to make it look like we are closed or to make us invisible from passing trade,” Perkins said.

“We have over two years remaining on our lease and have full access to use that part of the arcade for our tables and chairs.

“We are not closing down, and we have no intention of moving.”

Owner of Ash and Kay’s Rocket Café, Joseph Raj, said they too had been blindsided by the timber wall’s construction, which also obstructed his café.

“It’s not a good thing that’s happening, and I really don’t know anything about it,” Raj said.

“It’s just really not good for the business.

“Even when I signed the contract with the real estate, I asked them if there was demolition or anything happening, and they said there was nothing, but would let me know if there was.”

Perkins said they had contacted the building manager, but it was still unclear as to why the wall was built or why nobody was informed.

“When we decided to open Helado four years ago we were just a family wanting to have a go, trying to bring something a bit different to the Coast,” Perkins said.

“We’re very proud of the fact that we can support so many locals with jobs and simply want to continue with the business we started, in the location we chose, for the remainder of our agreement.”

Police to focus on mask rules

Kibbleplex to be demolished as stage 1 of $345M development