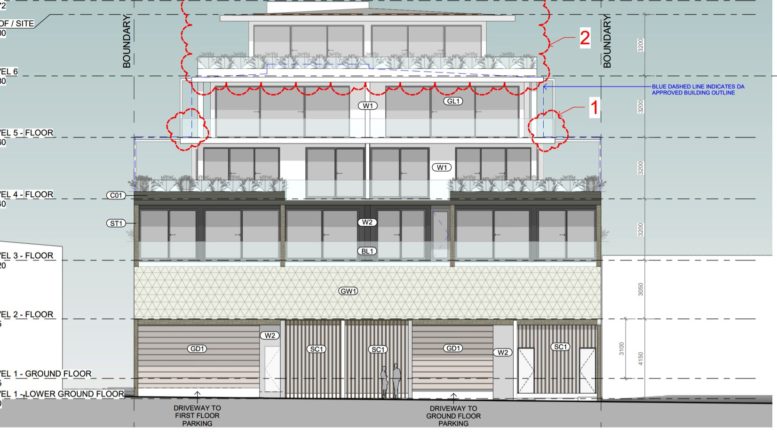 This diagram shows the proposed amendment

A Terrigal developer has gone back for another bite of the cherry, attempting to amend an approval from last year to add another storey to a development in the centre of Terrigal.

The originally approved maximum building height was 16.38m for five storeys while the extra floor would bring the height up to 19.67m.

The applicant already received Council approval in September last year to vary an earlier approval from 2019 to erect a five-storey building in Church St – on land that had been used as a car park.

The 2019 DA didn’t comply with height and floor space ratio under the Local Environment Plan as well as being non compliant on eight counts with Development Control Plan and\or the Apartment guidelines but, after vigorous debate, it did get passed by a majority of councillors.

The 2020 amendment added car spaces, reduced the floor space and changed the approved category of ground floor premises from shop to business premises.

It also revised the internal layout of levels and apartments.

Now, with work on the site already progressing, the applicant has asked for further amendments.

It wants a new Level 6 penthouse, increasing the number of residential units from 12 (approved) to 13 and consequentially revising the roof plan and enlarging the terraces of the approved Level 5 residential units.

The land, at 5-7 Church St, has an area of 942m2; a frontage to Church St and a rear boundary frontage to Hudson Lne.

The application for the amendment says the land is functionally part of Terrigal Town Centre and provides one of the few immediate opportunities for significant redevelopment consistent with the intended function of Church St as one of the principal “mixed use” streets.

The application says the development would still be substantially the same as that approved in 2017.

It says the proposed penthouse level does not result in any significant additional view loss from neighbouring developments.

Residents can have their say on the proposal until February 15.