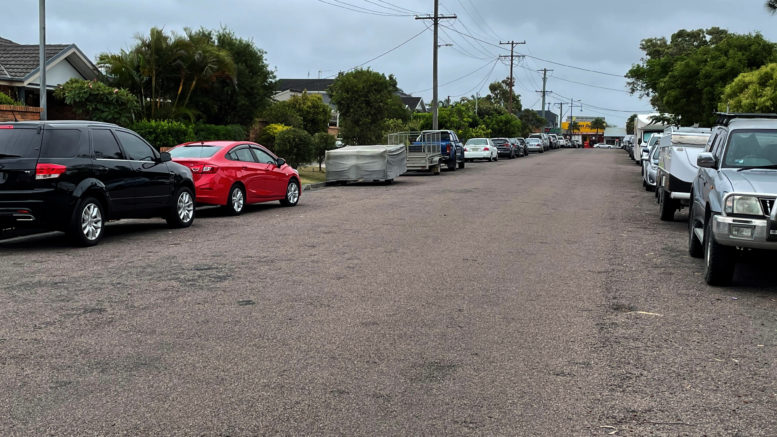 Parking is always at a premium along South St

A development application lodged on January 25 for a residential flat building at 42 South St, Umina, has already attracted six submissions in opposition, with major concerns raised including parking congestion and lack of green space.

The application, by CA Pedavoli, would see six units constructed on the small block at a cost of $3.19M but no planning documents were available on the Central Coast Council website as at January 26.

One submission said too many cars already blocked the street as shoppers, visitors and residents all compete for the limited space.

“It is a hot street to walk as the vegetation has diminished and hard surfaces have increased and traffic has increased,” the submission says.

“Cars are parked on both sides of the street day and night already so six households is too many for this size block in South St.

“While the building works proceed there will be less room to park and walk during this time also.

“It would be smart to prioritise an increase in vegetation in South St to partly mitigate the heat sink effect experienced currently in this area.”

Another submission said it would seem highly unlikely that placing six villas on the site could possibly meet building code criteria.

“Each villa would require a garage, visitor parking (would need to be) provided and the complex would need to meet the required hard surface/soft landscaping ratio,” it says.

“Plans and details need to be provided to all residents of South St due to the existing problems already experienced in this street of parked cars.

“This is due to close proximity to the beach and shopping centre and in particular staff working in Bunnings occupy many parking spaces in the street.”

Another objector said the development would impact liveability in the area and called for a substantial reduction is size of the proposal.

“With such a heavy footprint, there will surely be no room for appropriate setbacks and trees,” the submission says.

“This will greatly diminish our liveability and the value and desirability of our suburb.”

One submission said another matter of great concern was the lack of green space in a development of this size on a house block.

“I believe that the usual three-unit development for a house block in this area should be adhered to,” it says.

Every submission expressed concerns over parking issues in an already crowded street close to the main Umina Beach shopping strip.

Details of the proposal will soon be available on the Council website.