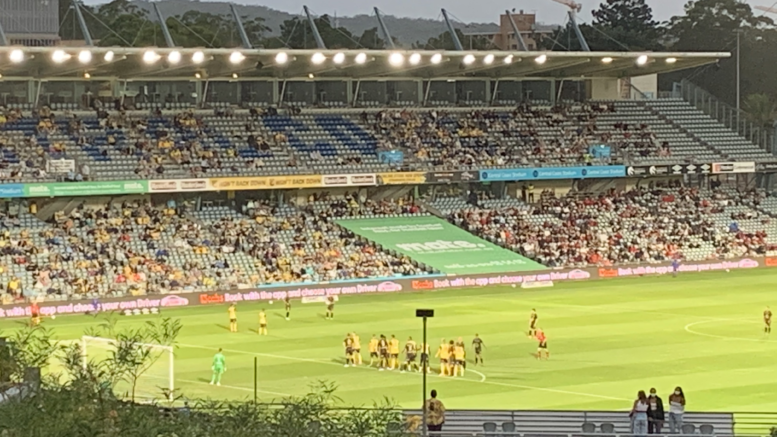 Central Coast Mariners in action at the stadium in Gosford

An intense game between the Central Coast Mariners and the Western Sydney Wanderers at Central Coast Stadium has ended the hosts’ last minute defeat.

The single goal that pinched the match came late in the game after a dynamic contest that swung in momentum throughout the 94 minutes.

Both teams went into the game in form, with the Mariners winning their first two games of the season and maintaining a 5 game undefeated run in the A-League with 3 wins and 2 draws.

The Wanderers started their season with a win, a draw and a loss, and came to the Coast with a large majority of the winning history in this fixture.

Of the past eight matches between these two at Central Coast Stadium, the Mariners have won only one in April, 2019.

The first half finished goalless with the majority of chances coming for the Mariners despite not seriously testing Wanderers goalkeeper, Margush.

The team showed a dynamism in their approach, taking the onus to maintain more possession and territory than they did last round against Macarthur FC.

Both wingmen showed great promise on the ball, with Nisbet consistently finding himself in space on the end of forward seeking passes and De Silva shining in possession with multiple instances of fancy footwork against the marking of ex-Mariner, Ziggy Gordan.

In defence, the team were disciplined in maintaining a deep defensive line, allowing the Wanderers the ball in their own half and striking for possession in the midfield.

Nonetheless, an incisive Wanderers side showed a willingness to push forward with searching passes on the break, one of which was prevented from heading goalward with the last defensive touch by Ruon Tongyik.

As well as this, a perfectly delivered free kick by Wanderers Captain, Graham Dorrens in the 11th minute found the head of Simon Cox in space in front of goal, who will feel amiss for blazing the ball well above the crossbar.

A couple of minutes later, a high cross by Jack Clisby for the Mariners reached the head of Matt Simon in front of goal, yet too much height on the cross took away from the potential to generate power in the header so that Margush was able to push the ball out for a corner.

The second half saw a noticeable shift in momentum with the Wanderers getting a stronger control over possession.

In the 56th minute, a chance fell at the feet of James Troisi for the Wanderers after a smart back header from Cox.

For the time being, Birighitti was up for it, blocking his shot which had a lot to aim at.

A minute later, a great lobbed pass over the defensive line found Matt Simon for the Mariners in front of goal but was half a yard too ahead of him and the slight chip by the forward didn’t have the power to overcome Margush.

With the hour mark in the game going by, the game reached a new level of intensity with the Wanderers pushing to control more of the ball.

Going into this game, of the past eight goals scored by the Wanderers against the Mariners, six of them have come in the 66th minute or later and today that history repeated itself.
Mark Natta of the Wanderers showed great vision with a lobbed through ball within his own half that was at first skewed away from goal by the head of Jack Clisby.

The forward moving Bruce Kamau got to it first and had a shot at goal that was blocked by Kye Rowles.

Unfortunately for the boys in yellow, the ball ricocheted into the path of Nicolai Müller who faced half a goal of space and put the ball over a stretching Birighitti who must now say goodbye to his run of clean sheets.

The Mariners responded with a lot of pressure on the ball, but couldn’t again get a clean passage to goal.

The result has pushed the Wanderers to the top of the league table with seven points.

The Mariners now sit at third behind Macarthur FC with a game in hand on the two teams above.

The team will now need to shake off their first defeat quickly, for they will be meeting Sydney FC away later this week on Friday, 22 January.