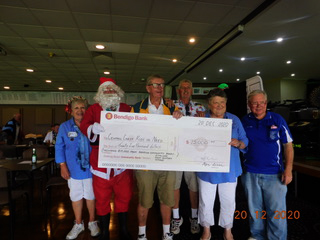 The Ettalong Club has raised a total of $26,000 for the Central Coast charity

An Ettalong club raised a total of $26,000 in 2020 to help support families with prolonged illnesses on the Central Coast.

Since last January, Ettalong Bowling Club has been hosting monthly charity raffles to raise funds for the Central Coast Kids in Need organisation.

The announcement of the total amount raised was made at the club’s last event of the year on Sunday, December 20.

Although wet weather kept the bowlers off the green, people still flocked to the raffle and trivia events to help raise $1,000 on the day.

The amount was then doubled by a generous donation from Woy Woy Leagues Social Club, which was then followed by donations from the Everglades Friday Bowlers and the Ettalong Wednesday Bowlers.

“We would again like to thank all of our supporters for donating raffle prizes for our charity day,” Dixon said.

“Santa also made a surprise appearance and brought the house down … or more to the point, his pants fell down much to the enjoyment of many in the audience.

The club’s 2020 fundraising efforts were aided by a $15,000 donation from the Coast’s three Bendigo Community Banks – Ettalong, East Gosford and Wyong.

Dixon also revealed the three branches will be donating a further $5,000 in the New Year to the charity fund.

“[This is] fantastic support from these community banks,” Dixon said.

The Central Coast Kids in Need organisation focuses on raising money to assist families who have children with prolonged illnesses, with funds used to cover travel costs, equipment requirements and pharmacy accounts.

The club will hold its next charity day this Sunday, January 17, with future events to be held every third Sunday of each month.