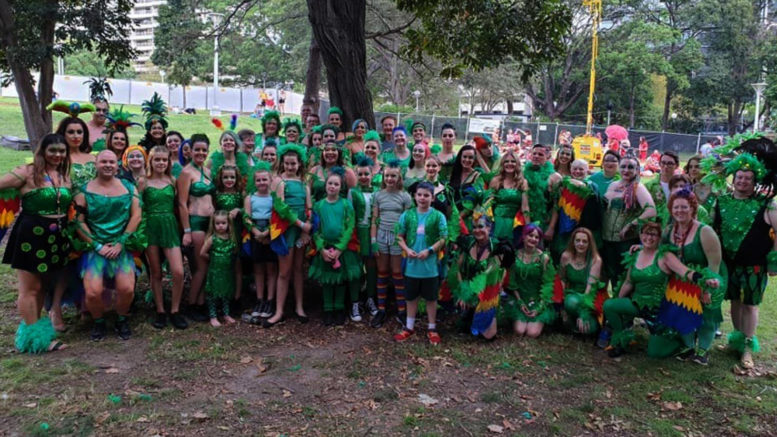 For the first time in its 43-year history, the Sydney Mardi Gras Parade will be transforming the Sydney Cricket Ground into a glitter fuelled showcase of LGBTQI+ culture and community, when 5,000 paradegoers from 100 LGBTQI+ community groups from around Australia take over the venue on March 6.

Among them is the Coast’s own Coastal Twist Festival, who’s collective of LGBTQI+ doers, makers and allies are busily getting ready to make a splash and a statement with their ocean themed float and costumes.

“This year’s Mardi Gras theme is ‘Rise’ and most locals would have felt the impact of droughts, fires, floods and a global pandemic.

“It has tested everyone’s spirit and resolve.

“Throw creatives and marginalised peoples into that mix and as the agents of change, we know first hand when we rise to the occasion, amazing things happen,” said Coastal Twist Chair, Juan Iocco.

Leigh Rijff and Shane Milsom have stepped up as Coastal Twists’ 2021 Co-Head Float Designers and the pair said that their vision for this year’s festivities was one of unity and celebration.

“Our intention is to bring our multiple diverse local communities together as one unique and beautiful force through our float.

“As the hinterland rolls down to our coastline, the Central Coast creates one of the most amazing coastlines in the world and with that magic as our inspiration, our float will ‘Rise’ with some of the fabulous hidden creatures from the depths of our salty waters,” Milsom explained.

“Mardi Gras is this magic time of year where we all come together as a community to not only make something special to showcase the Central Coast at the parade, but it’s also about forming new bonds, new connections and making lifelong friendships that continue well after all the glitter and glamour ends,” Rijff said.

With 2021 to be just Coastal Twist’s second appearance in Sydney Mardi Gras, Iocco said the organisation was honoured to have been chosen to take part in the revamped Covid-safe version of the event.

“The 2021 Parade will take inspiration from its past and move away from large floats, focusing instead on the outlandish pageantry of vibrant costumes, puppetry and props that made it such a phenomenon in its earliest years.

“In a twist of fate, getting back to community roots is one of the good things that’s come out of this pandemic and anyone wanting to get involved with Coastal Twist and the parade, from marching, costume making to admin, can learn more on our website,” Iocco said.

Coastal Twist festival is cancelled for this year