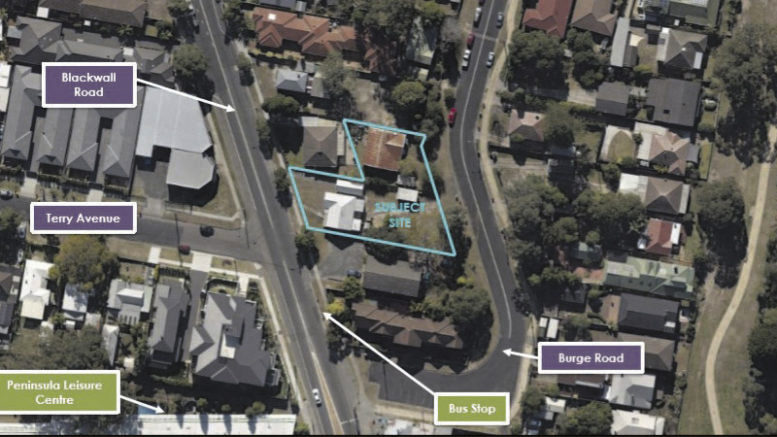 The site for the proposed development, which has been knocked back by the Local Planning Panel.

A proposal for a multi-dwelling housing site at 259 Burge Rd and 200 Blackwall Rd, Woy Woy, has been knocked back by the Central Coast Local Planning Panel.

Following a recommendation from Central Coast Council, the Panel voted unanimously at its December 10 meeting to refuse the application, which would have seen the construction of six townhouses in two, three-storey blocks.

The proposal, put forward by Ark Express Design, was to build the four-bedroom townhouses on a roughly L-shaped block with frontages to both roads, with two of the townhouses to face and gain access from Blackwall Rd and entry to the other four to be from Burge Rd.

The application stated that the proposed development was permissible within the R1 General Residential zone.

It sought a variation of floor space ratio of the 0.6:1 ratio required by planning provisions, to increase it to 0.81:1, claiming that such a restrictive development standard would not be appropriate for this project.

Other variations were sought to allow changes to the side setbacks as well as the provision of open car spaces in the front setback.

A statement lodged with the application said the proposed setbacks would not result in any adverse impacts from overshadowing or privacy to any adjoining properties and building separation would be provided between the new development and the units to the south, so the objectives of the setbacks would be achieved.

A variation to car parking requirements was sought to allow three open spaces in the front setbacks, with one space facing Blackwall Rd and two on Burge Rd.

The statement said the development would be contemporary in design and present an appropriate height, bulk and scale, in keeping with the “emerging character of the surrounding medium density neighbourhood”.

But the Panel found the development failed to adequately justify departures from clause 4.4 of Gosford Local Environmental Plan 2014 (GLEP) in relation to Floor Space Ratio.

The Panel also found submitted documentation did not provide adequate information to enable a proper assessment of the proposal and that the development was not in the public interest.

First Stage of The Rise opens in Erina