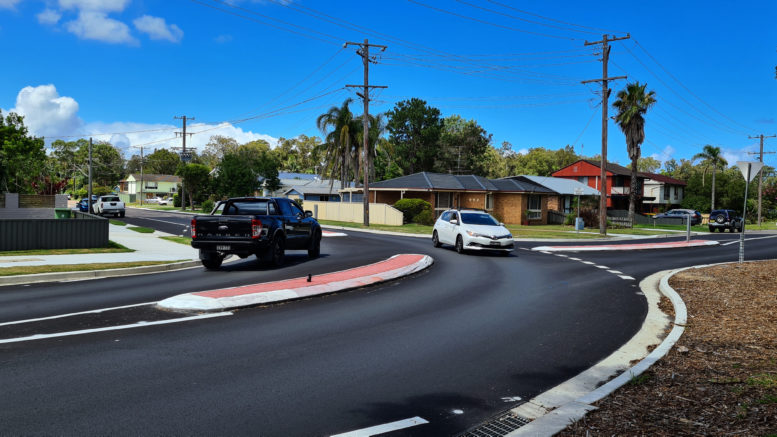 The upgraded intersection in Berkeley Vale

A Berkeley Vale resident is concerned that new traffic flow conditions at the Lakedge Ave and Gregory St intersection will cause more accidents.

Stephen Towers says that already people are driving over the new traffic islands, hitting the gutters and have flattened signs, in order to avoid a rear-end collision.

He said he’s approached Central Coast Council with information and photographs, but his concerns seem to be falling on deaf ears.

“Already it’s gotten really, really close and all they’ve said is that it is going to stay as it is and drivers are going to have to learn to manoeuvre,” Towers said.

In addition to the new kerb and gutter, footpath, drainage and road pavement works, the upgrade of this intersection included altering the priority to heavy traffic flow from Lakedge Ave, continuing around a bend on to Gregory St.

A Council spokesperson said the upgraded intersection design was presented to the Local Traffic Committee for endorsement, with the final works at the intersection including linemarking and additional signage.

“There are signs at the approaches to the intersection to alert motorists of the changed traffic conditions as well as Give Way lines, edge lines and centre lines to guide drivers, and more signage and linemarking works will be completed in the next week,” the spokesperson said.

Stephen Towers said that one of the problems was that drivers were speeding along Lakedge Ave.

“Now that the Give Way sign has gone, they just drive straight on through without looking to see if any cars are coming along Gregory St,” Towers said.

“You can’t tell that the street goes around the bend, you just come up to it and then suddenly there’s a traffic island.

“For anybody not knowing the road, they are unaware there’s a bend coming up and could very well finish up in the bush ahead if they can’t make the turn.

“There’s no arrow signs warning drivers that the road continues around a bend and drivers are not expecting to see any through traffic continuing along Gregory St.

“Also, it’s a hazard at night because it’s a very dimly lit road and there’s only a very weak street lamp on that corner.”

Towers said that another problem was that people wanting to drive straight ahead on Gregory St, instead of veering left into Lakedge Ave, had to stop suddenly for cars coming from that direction because the line of sight was obscured, particularly by parked cars.

“The cars coming out of Lakedge are cutting across the front of them and the cars behind aren’t expecting that and there’s been many near-miss rear-enders.

“It’s very messy there now at that intersection,” Towers said.

“I’ve lived here for 30 years and I’ve never seen such traffic chaos on that corner like there is now, but Council doesn’t seem to understand.”