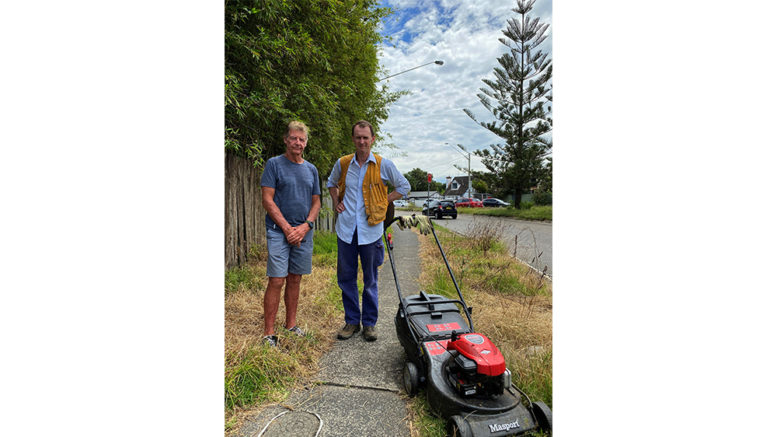 Peter Pracy and The Entrance MP, David Mehan next to an overgrown median strip

The Entrance MP, David Mehan, is calling on Central Coast Council to undertake much needed maintenance of road median strips and verges before the holiday period commences.

The funding is linked to an agreement for the work to be done.

“I accept that Council should be paid more money to do this work, but having signed an agreement, it needs to fulfil its obligations,” Mehan said.

“Anyone can see that these roads are not being maintained as required under the agreement,” he said.

“Our region relies heavily on tourists, but tourists won’t visit an area that looks rundown.

“Our main roads look rundown because they are not being maintained.

Wyong Rd used to be a grand avenue with well-maintained vegetation, but now it’s just a bunch of weeds,” he said.

Peter (Big Wave) Pracy, who was previously a groundsman with the former Gosford Council, raised the issue with Mehan.

“The state of these roads is disgraceful and an embarrassment,” Pracy said.

“When I was a groundsman, we used to have four people on the team, but now I hear that there is only one,” he said.

A Council spokesperson said maintenance works was being prioritised and focussing on sports grounds, parks and play spaces ahead of the holiday period.

“Council uses funding from the NSW State Government to maintain median strips and verges in respect to the safety of road users, and currently there is no identified risk to road users from the weeds,” the spokesperson said.

Train station to get facelift