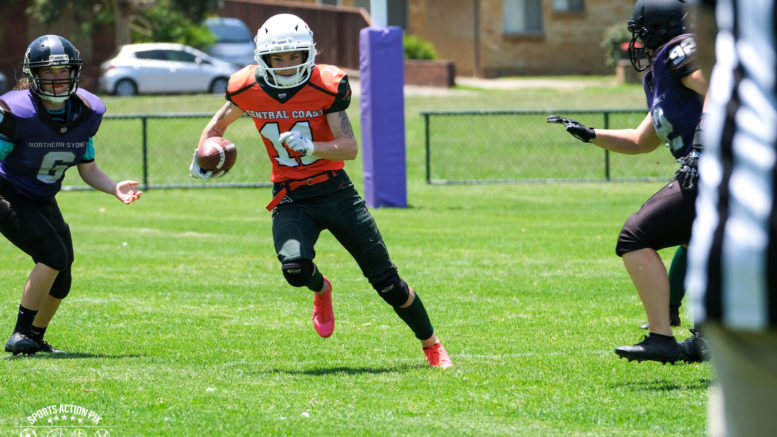 The Central Coast Sharks have continued to make waves in Gridiron NSW’s 2020 Women’s Competition, as they continue to work towards their first crack at the championship.

Fresh meat in a competition made up of seasoned veterans, the Bateau Bay based Sharks started their season with a disappointing 30-nil loss against the UNSW Raiders in Round 2, but since then they’ve been on an upward trajectory.

In Round 3 they pulled off a satisfying 28-nil victory over the UTS Giants and backed that win up with a 12-nil win over the Sydney Uni Lions in Round 5 (the Sharks did not play in Round 4), before pulling off the three-peat with another commanding 32-nil win over the Giants in Round 6.

Round 7 saw the Sharks stumble, with a 24-14 loss against the Northern Sydney Rebels and with Round 8 cancelled due to extreme heat, their record this season stands at three wins from five games played, putting them in equal second on the leaderboard with the Rebels via win rate, but technically the Sharks are ranked third based on points difference.

But with the undefeated Raiders pulling the bye in upcoming Round 9, all eyes will be on the Sharks and the Rebels who have a unique opportunity to put some distance between themselves while simultaneously closing the gap on the ladder leaders courtesy of the fixture, which sees the Sharks poised to meet the Lions and the Rebels to meet the Giants.

Should the Sharks win and the Rebels lose, it’ll be a valuable chance to pull ahead via win rate and also catch up in points difference, but with the bottom of the ladder Giants yet to win a game this season, an upset is not something the Sharks should be banking on to tip the scales in their favour.

But rankings and leader boards aside, Sharks’ President, Luke Smidmore, said the Sharks’ sole focus would be returning to their winning ways.

“Round 7 saw us go down to the Rebels after some good wins previously, but as one of the more elite teams in the competition we knew that game was going to be hard and it was encouraging to see our players hold their own, given how many of them are rookies.

“The rookies especially impressed, and the coaches all agree that their performance that round bodes well for the rest of our season.

“The Lions are also a great team and even though we’ve already beaten them once, we aren’t counting that for anything and are expecting a tough challenge come game day.”

Speaking about the Raiders’ nigh untouchable position in the regular season, Smidmore said the Sharks were looking further ahead.

“The Raiders have been exceptional and they’re definitely the team to beat, but right now our focus is on making it to the finals series.

“In any game things can go wrong or right and that can have a big difference on the scoreboard, but in the grand final it really does just boil down to who’s the best on the day, so that’s what we’re aiming for.”

Round 9 kicks off on December 5 at Forestville Park.