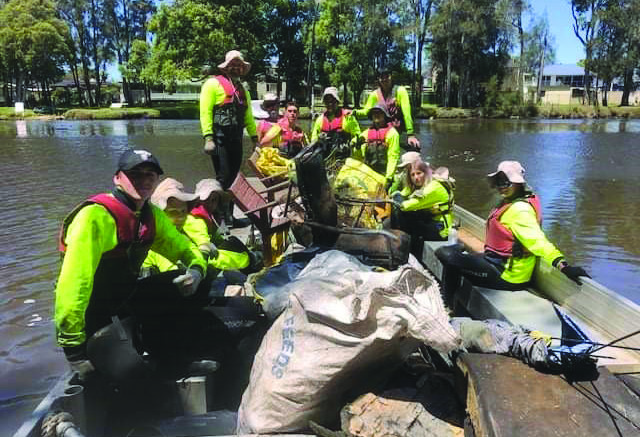 Marine science students at Wadalba Community College and The Entrance campus of Tuggerah Lakes Secondary College have been out with Clean4Shore, in the water and the mud, to collect rubbish around Tuggerah Lakes.

It was the first time out for Wadalba Year 11 Marine Studies students, who joined the Clean4Shore team at the Geoffreys Rd meeting point and then on to clean out rubbish from both peninsulas of Ourimbah Creek leading into Tuggerah Lake.

Tyres were dug out of the mud, outdoor chairs and mattresses, as well as plenty of small litter such as plastic bottles, soft plastics and polystyrene.

Clean4Shore leader, Graham Johnston, said that along the way, teaching staff were highly proactive in explaining the dangers of these items breaking down in this waterway.

“The small island at the front of the south peninsula had another surprise for the team as a soft mud channel had our group knee deep in mud.

“There were plenty of old crab traps pulled from the shallow water, an old timber chair was also removed from this Crown land site.

“The southern peninsula of Chittaway Point had consistent small litter all along the southern foreshore, with several larger items including more tyres and treated pine carried to the barge waiting in the creek.

“It was a tough day out with shallow water and mud making for a hard task, but well handled by this group with inspiring leadership by the supervising teachers, positive group skills shown by the students, and Simon as always providing motoring and native life skill support.”

Tyres were retained for cleaning, the treated pine planks were held for recycling and 420kgs of other rubbish was offloaded at Woy Woy tip.

On another day, it was the marine science students from The Entrance campus of Tuggerah Lakes Secondary College, who met at Long Jetty boat ramp for the trip by the Clean4Shore barge to Magenta.

“Our first task was to monitor the foreshore litter south of Picnic Point boat ramp and park,” said Graham Johnston of Clean4Shore.

“Small items were present all along the 400m of foreshore with three very full bags collected.

“The foreshores at North Entrance, past the caravan park towards Magenta, had consistent large amounts of small and larger litter items which were collected from this 200m of foreshore.

“The task was difficult with the shallow water and rotting sea grass presenting obstacles for the students in order to get to and from the foreshore, and the smell was also very bad.

“There were plenty of plastic bottles (510) above the tidal mark, possibly deposited from the floods in February, soft plastics (505) and hard plastic (405) plus polystyrene (265) dominated the 30 full bags collected.

“This foreshore was last cleaned in 2016 and these litter sightings suggest much more work is required on the three-kilometre section through to Canton Beach,” Johnston said.

All litter was deposited at the Woy Woy tip with the tyres returned for cleaning prior to recycling.