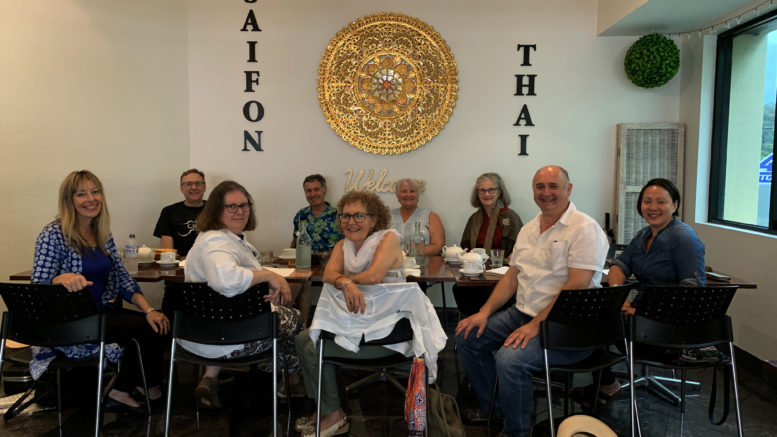 A publication on a series of creativity and wellbeing conversations held on the Central Coast called Thai Mondays has been recognised by the National Network of Arts and Health.

Director of Salus Creatives and founder of Thai Mondays, Elio Gatti, has been running the Monday monthly gatherings at local Thai restaurants since 2018.

He aims to create a space where local-born creatives can come together debate, discuss and share ideas on how creatives’ arts and health work hand in hand.

“Each month we ask a local creative who is a master in their field to present how their field of creativity works hand in hand with wellbeing,” Gatti said.

“We are very careful to give a voice to people who know what they are talking about.

“There needs to be a level of quality.”

People who attend the Thai lunch are encouraged to discuss and ask questions on the topic, which is all then combined into an article constructed by Gatti and the speaker.

“The group is a little bit like a think tank,” Gatti said.

“It has no membership and is open to everyone.”

Gatti said the National Network of Arts and Health was really interested in the publication as they did not know of any other groups holding these meetings.

“The National Network of Arts and Health was established in 2019 by three universities, in partnership with the Black Dog Institute,” Gatti said.

“The publication went national, so this was a big deal for the Central Coast and for us.”

Gatti is no stranger to the creative cultural space, spending two decades working as an academic by day, and director by night with theatre and movement companies around NSW.

He also worked for Gosford Council for 16 years and was instrumental in developing the Five Lands walk.

“History, Arts and Science have historically been very separate,” he said.

“Art was for entertainment, and health was science.

“This separation held true for over 100 years.

“Thirty years ago in Canada, they opened a centre for arts and health, and (opened one) 10 years ago in the UK.

“Then in 2018, three Australian universities and the Black Dog Institute realised that arts and health is a thing, and it works.

“This marriage can bring insight, especially for mental health, because it is an illness that is invisible.

“For example, we now know that creativity can help sufferers of chronic fatigue.”

The next Thai Mondays conversation on December 14 will be presented by speaker Stuart McKinn on First Nations Method, A New Way Forward, and held at Saifon Thai Restaurant in Gosford.

Gatti said he chose Thai because the food is delicious and spicy, just like the conversations.

“Thai represents to us a little exotic, varied, bit different and spicy, the characteristics of this marriage of science on one part and arts on the other,” he said,

Why your vagus nerve is the key to wellbeing

Expressions of interest sought for next series of Thai Mondays