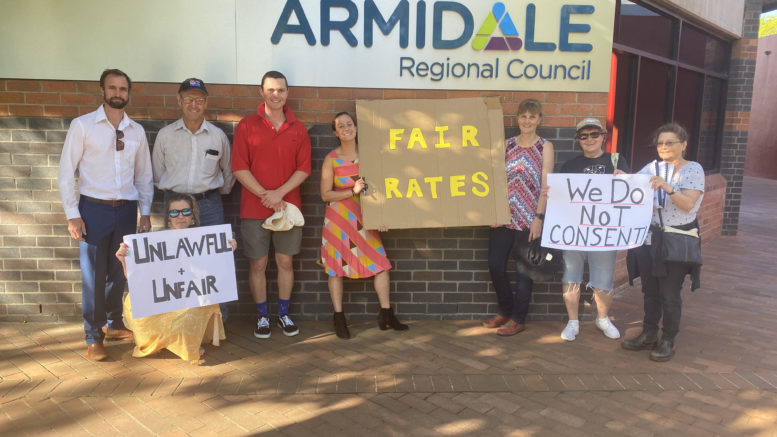 Irate Armidale residents have offered support to the Central Coast, setting up a Facebook page for Coasties to campaign – like Armidale – against a rate rise.

The Facebook page is called Protest Against Extreme Rates of the Central Coast and has been started as a sister page to the one for Armidale.

Joshua Fittler, a fifth generation New Englander whose family settled on the outskirts of Armidale in the 1850s, started both pages and has added some Coast administrators to the local page.

“This group is for the purpose of forming real plans and taking real action against rate hikes and irresponsible fiscal management within the Central Coast Council,” Fittler writes on the page which already has almost 300 members after going public a few days ago.

“This is not a group for tyre kicking.”

The Armidale page has more than 800 members and the group has held some public protests.

Fittler was a candidate for the previous Armidale Regional Council election and is leading the charge against a rate hike in his area.

Armidale residents are facing rate rises that would total 20 per cent under one option.

Minister for Local Government Shelley Hancock suspended Armidale Regional Council on June 12 for a period of three months and appointed an Interim Administrator.

That was extended for another three months with suspension due to end on December 11.

Here on the Central Coast, our Council was put under administrator, Dick Persson, on October 30 and he has said he will ask the Minister for a second three months in the chair before handing the business back to the councillors.

The other option is to continue in administration and hold an inquiry.

The Armidale ratepayer rights activists are demanding a fair and reasonable level of rates as well as a higher degree of financial transparency from Armidale Regional Council.

Fittler says the problems are not much different to the Coast.

“We are in the middle of the most significant economic downturn for 70 years,” he said.

“On top of that, the community is recovering from the effects of bushfires and the worst drought in the history of rainfall recording.

“And the Council wants to make permanent a seven year old special rates variation of 10 per cent which was due to expire this year and apply for another 10 per cent.”

Here on the Coast, the Administrator has flagged a possible 10 per cent rate increase.

The Independent Pricing and Regulatory Tribunal (IPART) will make the final decision.

Central Coast Council blamed the IPART decision to decrease water rates by a total of $39M in 2019 for adding to its financial woes.

The Council revealed on December 2 that the Coast is $565M in debt, partly due to $200M in restricted funds being accessed for operational funds when they shouldn’t have been.

The council already had a debt of $317M when it was formed in 2016 as an amalgamation of Wyong and Gosford local government areas.