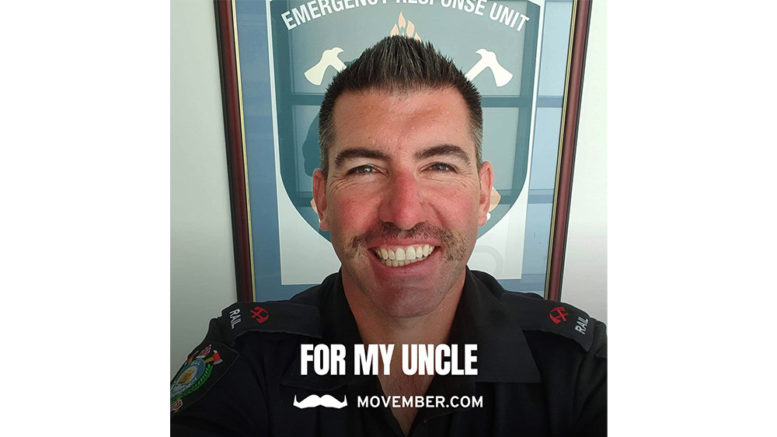 Aaron Parker is no stranger to a good mo.

The Tuggerah local has been taking part in Movember for the past 10 years, and is a whisker away from his 11th crack at the leading global men’s health fundraiser, which kicks off from November 1.

Since 2003, Movember has funded more than 1,250 men’s health projects around the world, challenging the status quo, shaking up men’s health research and transforming the way that health services reach and support men through prostate and testicular cancer, and suicide prevention.

A professional firefighter with a family history of prostate cancer, Parker said Movember was a cause he would always get behind.

“I lost my granddad to prostate cancer, one of my uncles has had it twice and thankfully my brother-in-law has recently pulled through his own diagnosis, so it’s very personal to my family.

“The mental health aspect of it all is also pretty important to me as my colleagues and I deal with a lot of confronting stuff on the job,” Parker explained.

Last summer was particularly poignant for the Sydney Trains contracted firefighter, who spent most of the summer fighting fires in Armidale before heading home to fight the Gospers Mountain fire as a volunteer with Ourimbah RFS.

It was an extremely tough time in his life and the lives of his fellow firies, and that was before the Coronavirus.

Now having gone through lockdown, he reckons this year’s Movember will be the most important one yet.

“The world as we know it has changed and I have a lot of mates that didn’t cope with the isolation of lockdown, and hearing that, has renewed my passion for Movember.”

Movember’s Asia-Pacific Country Director, Rachel Carr, agrees that this year’s campaign will be the charity’s most important and she wants more Aussie Mo Bros to put down the shaver and take up the moustache comb.

“Research conducted by Movember shows us that the effects of the pandemic on men’s mental health is still far from over.

“Signing up for Mo-season is also a great way to stay connected within your own social circles, it’s been shown that supporting others can improve your own wellbeing.

“With the help of our community, Movember will continue funding and applying research to prevent our fathers, brothers, partners, sons and friends, from dying prematurely,” she said.

Some alarming figures from Movember’s research included 52 per cent of Aussie men indicating no one had asked them how they were coping during the pandemic; with 23 per cent indicating that their mental health had worsened in the first six weeks of the pandemic and 30 per cent noting increased feelings of loneliness.

Movember also found that older men were the group most likely to have experienced poorer social connection, with 61 per cent of men aged 45 or older who took part in their study reporting that they felt less connected to their friends since the initial outbreak.

Movember’s Global Director of Mental Health and Suicide Prevention, Brendan Maher, said the findings were worrying to say the least.

“Not surprisingly, our research confirmed that the impact of COVID-19 has hit men pretty hard.

“The statistics show us that men are anxious and uncertain about the future.

“Many guys are isolated and disconnected from their usual social support networks and the places where men usually go to have those shoulder to shoulder conversations with their mates, like going out for a drink or a bite to eat, watching or playing sport, or going to the gym, have been severely reduced.

“We know that men aren’t great at asking for, or seeking, help at the best of times, so we need to do as much as we can to buffer some of the problems they’re facing, now,” he said.

That means continuing to fund mental health services, cancer research and wellbeing programs as Movember continues to strive towards its goal of reducing male suicide rates by 25 per cent by 2030, but they can’t do that without funding, which is where Mo Bros and Mo Sisters come in.

For those who want to embrace the mo, Parker had the following advice.

“Accept that it’s going to be patchy in the beginning and make sure that what you’re growing suits your face.

“It can be challenging but it is so rewarding.”