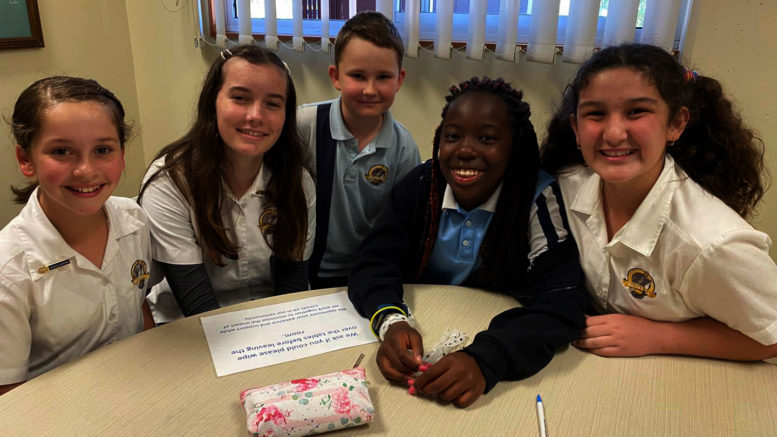 The team of Isabella Koen, Sienna Oliver, Matilda Sozinyu and Ruby Sutter, made it to the top 64 out of 666 government primary schools, before they were knocked out by Castle Cove Public School in Round 3 of the state elimination round on November 5.

While disappointed to not have made the final 32, according to WCS Debating Teacher, Kylie Snell, it’s the furthest that any Wadalba team has gone and an achievement that the entire school community is proud of.

“This group worked hard every step of the way and have risen to every challenge thrown at them.

“They gave up recess and lunch times to practice and have completed lots of extra work in their own time to prepare for their debates.

“They went the extra mile every single time and all that they’ve achieved was entirely based off their own merits.

“I couldn’t be prouder of them,” Snell said.

Migrated to online in account of the pandemic, the Debating Challenge is designed to develop the public speaking, reasoning and teamwork skills of Year 5 and 6 students, and as Snell explains, is a hefty undertaking for any 11-year-old.

“There’s a lot more to debating than just disagreeing with someone.

“The kids have to be confident enough to argue a point while articulating why they disagree and are given very little time to prepare.

“Topics are announced an hour before the debate with each team needing to come up with a definition of the topic based on their assigned role as affirmative or negative, arrange their arguments, predict their opponents’ rebuttals and think about how they’ll summarise their arguments and rebuttals in a way that disproves their opponents’ definition.

“I think there’s a lot of adults who’d struggle to plan all that in an hour.”

Given the task of arguing the affirmative that children should be banned from participating in Halloween, WCS’s arguments centred around the potential dangers of unsupervised children wandering the streets and approaching strangers, health risks given the current Covid climate, as well as the impact of excessive lolly consumption and the idea that Halloween is not an Australian tradition.

Their opponents argued that the American holiday taught kids about responsibility and personal safety, created social opportunities and was an overall positive and fun experience for families.

While both teams raised excellent points, Castle Cove ultimately won the day off their stronger rebuttals.

In congratulating the girls, Snell also made special mention of Riley Carroll, the team’s chairperson and debater in training, who had assisted the team throughout the year during practice debates and who’ll lead it next year after current members graduate.

And it appears he’ll have a lot of company, with lots of students expressing interest in joining the debating team next year after the landmark result.

“The girls were very disappointed but very proud of themselves.

“When they returned to class, they got a standing ovation from all of Stage 3.

“Our community is so proud of what they have done.

“Many students from Stage 2 and 3 are itching to have a go and are excited to have the opportunity to be in the team with Riley next year,” Snell said.