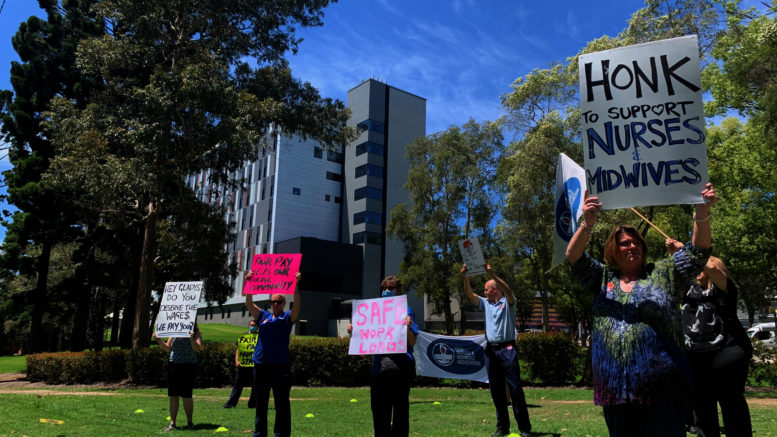 Nurses and midwives were out in force on Wednesday, November 4, protesting the State Government’s latest public sector wage rises as they rallied outside Gosford Hospital.

NSW Nurses and Midwives’ Association (NSWNMA) members said they were stunned by the government’s decision to cut the public sector wage cap from 2.5 percent to 1.5 percent from 2021, following on from a rise of just 0.3 percent this year, instead of the expected rise of more than 2 percent.

Kelly Falconer, representing the Wyong Branch of NSWNMA, said members had endured excessive workloads for months on end, every day on every ward we run short when we don’t have enough staff, and we are constantly being asked to do overtime.

“The number of patients is going up, our number of staff is going down, especially through COVID, and our leave has been postponed because of the pandemic, and it’s just getting to the time that people are getting exhausted.

“It’s been a very stressful six months, and to go through that and then to be told that the measly pay rise that we were due to get was now going to be forfeited, it’s quite heartbreaking really.

“We’ve just been to the Industrial Relations Commission to get a staff increase in the Emergency Department, and it took us seven months to fight, so we are fighting like this just to get the staff we require.

“Our pay rise was signed, sealed and just wasn’t delivered, and now they’ve taken it away from us

“To pay the 2.5 percent increase isn’t a huge increase but what it does is put money into the economy because we’ll continue to buy products and services, but at the moment the 0.3 percent gives us nothing, about $5 a week, that’s not even going to cover the cost of the increased price in petrol for instance.

NSWNMA General Secretary, Brett Holmes, said the Treasurer’s decision to cap wages growth at 1.5 percent and hint that actual pay rises could be even less from next year, was opportunistic and economically reckless.

“At a time when the government should be investing in wages and securing the future of our health workforce, they are locking NSW into a low wage, low growth future that will send nurses and midwives interstate,” he said.

“Workers in every city, every region and country town in NSW have woken up to this slap in the face from the Treasurer,” Catley said.

“The economic consequences of this decision will be felt for years to come and comes at the worst possible time for the state as it faces the daunting task of a post-Covid economic recovery.

“Removing this money from circulation in our local economies will have a devastating flow-on effect that will be felt in every town and down high street.

“It is contrary to all good economic sense.”

Shadow Minister for Industrial Relations, Adam Searle, said the move was an insult to every single worker who kept our society going during COVID-19.

“The teachers, nurses and hospital cleaners on the frontline of the pandemic, along with the transport and administrative workers who kept the state moving deserve better than this,” he said.