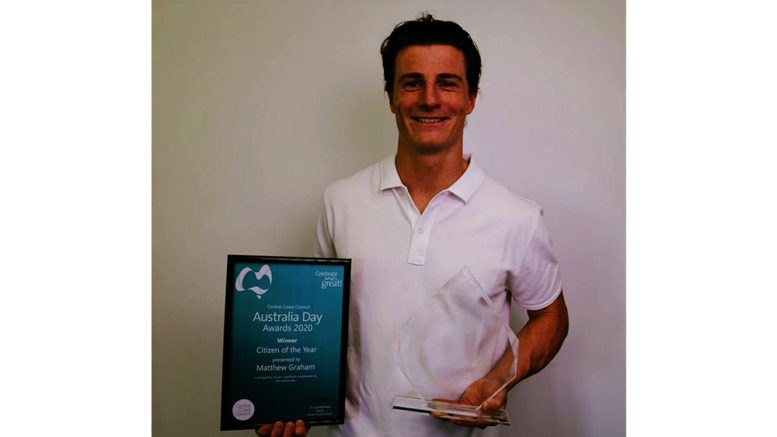 Olympic skier, Matt Graham, was the Coast’s 2020 Citizen of the Year

Nominations for Central Coast Council’s Australia Day 2021 Awards are now open, providing an opportunity to recognise local individuals and groups who make an outstanding contribution to the region.

Central Coast Council Director Connected Communities, Julie Vaughan, said the awards are more important than ever after a year of unprecedented challenges.

“An Australia Day nomination is a wonderful way to honour the local leaders who go the extra mile for our community,” Vaughan said.

“There is no denying that 2020 has been a year of unprecedented challenges, and in the midst of it all, we’ve seen individuals and groups step up and make a difference in our community.

“Our Australia Day nominees and winners are often unsung heroes who work quietly behind the scenes to make the Coast a better place to live, work and play.”

“We’ve demonstrated tremendous resilience as a community in 2020 and there are so many individuals and groups who deserve recognition,” Mayor Matthews said.

“The breadth of the Australia Day Award categories means that a diverse range of contributions will be recognised and I encourage our community to nominate the local heroes they believe should be acknowledged.”

Award categories are: Arts, Culture and Entertainment – Awarded to an individual who has demonstrated excellence in their chosen art form and made a significant contribution to arts, culture and entertainment on the Coast.

Business Connecting Communities – Awarded to a local business or enterprise with less than eight fulltime employees that has established a genuine involvement and long term value to the life of their community.

Community Service and Activity – Awarded to an individual or group responsible for creating community activities or services that benefit the Coast.

Environmental – Awarded to an individual who is leading the way in sustainability and making the Central Coast a place where people and nature can thrive.

Sportsperson of the Year – Awarded to an individual who has shown acts of sportsmanship and team building, been an outstanding sportsperson or made significant contributions as organisers or promoters of sports on the Coast.

Volunteer of the Year – Awarded to an individual (26 years and over) who has made a significant long-term commitment to volunteer work and demonstrated outstanding service and dedication to our local community.

Youth of the Year – Awarded to an individual (25 years or under) who has succeeded in his or her chosen field, acts as an inspiration to his or her peers and has made a significant contribution to the Coast community.

Each winner from the above categories will go into the running to be named Central Coast Citizen of the Year.

Nominations are now open and close from 2pm on November 27.

For further information, eligibility criteria and to make a nomination search ‘Australia Day’ at centralcoast.nsw.gov.au.