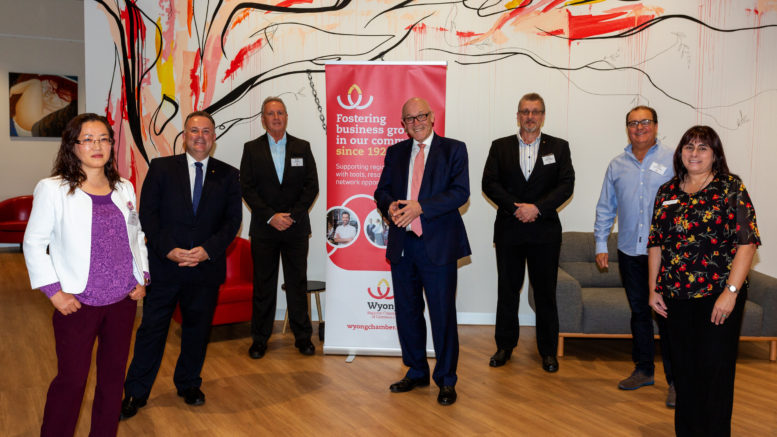 NSW Minister for Finance and Small Business, Damien Tudehope, was special guest at a Wyong Regional Chamber of Commerce event during Small Business Month in October.

The theme of the event was to support local small businesses to establish a level of digitisation that would help secure their businesses in the post-pandemic world.

Minister Tudehope said digital awareness was one of the most impressive parts of the small business response to the pandemic as businesses moved online or strengthened their online presence.

He spoke of his enjoyable day spent on the Coast and he was very impressed with the high level of positivity and creativity as businesses pivoted to deal with changing circumstances.

“This in turn speaks well of the ethics and integrity of the local area.”

Minister Tudehope said the government had applied what it learnt from last year’s Buy from the Bush campaign and successfully applied the same thinking to the Covid crisis.

“Local support for local businesses is so important to the health of a community,” he said.

“Whether it be drought, bushfires or a pandemic, local support for oneanother is vital.

“If local businesses close, then local communities start to shut down and fade.”

The Minister spoke on how NSW was now moving into recovery mode.

Border restrictions are due to ease and it is good to see that the Central Coast is getting 30 percent of state tourism to date, as it has become a “location of choice”.

Minister Tudehope said state and federal governments have their part in supporting the community and business and now it was over to small business to generate the economic recovery needed for the country.

He said a strong move within the government was to include more small business in the $30M annual procurement spend.

“Why should printing for local use not be done by a local printer?” he said.

“The idea is to deliver needed projects and use them to deliver dollars to the local community via local small businesses.

“The government is committed to this,” he said.

Parliamentary Secretary for Central Coast, Adam Crouch, praised the Central Coast Chambers of Commerce and the Bigger Backyard Project on the innovation shown and the key role that local Chambers played in the health of their business community.

He said 30 percent of the NSW Tourism budget was coming from the Central Coast as people travelled here to holiday or take a short break, and more than 1,500 Coast businesses have registered with the government’s Covid-safe regulations, he said.