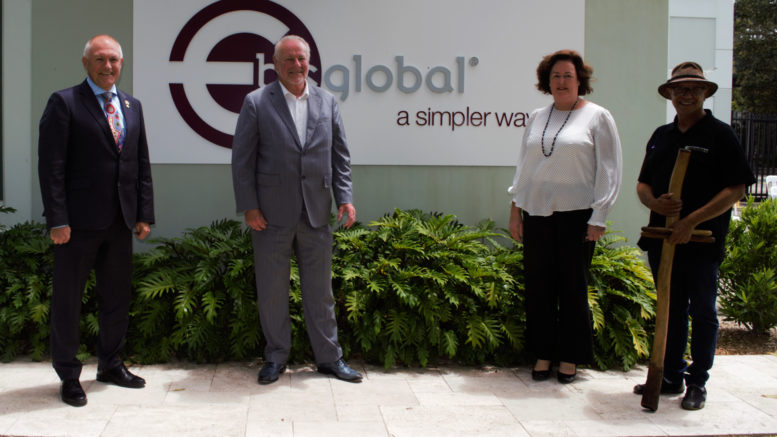 Wyong MP and Shadow Minister for the Central Coast, David Harris, with Paul and Ann Freeman and Gavi Duncan

A Tuggerah-based print management, procurement and software development company has transitioned to an Aboriginal-owned business.

Also there to support the turning point for the 30-year old family business were invited guests, including Member for Wyong and Shadow Minister for the Central Coast, David Harris, and members of the Barang Regional Alliance.

E-Bisglobal founder and Executive Director, Paul Freeman, said this year’s NAIDOC Week theme of Always Was, Always Will Be, which acknowledges and celebrates Australia’s true history dating back thousands of generations, was particularly significant for him.

Freeman discovered his Aboriginal heritage earlier this year, when he learned that his great-great-grandmother was the last remaining native Australian woman in the Liverpool district in the 1880s and that his family belonged to the Cabrogal Clan of the Dharug Nation, which occupied land along the Georges River for more than 30,000 years.

The ceremony was also attended by three generations of the Freeman family, members of which raised the Aboriginal flag, which had been presented to Paul Freeman in July by Member for Dobell, Emma McBride.

It now takes pride of place beside the Australian flag outside the entrance to the premises at Tuggerah Business Park.

David Harris said the business’s move would raise much needed awareness within the Central Coast and broader communities.

With members of his own family of Aboriginal descent, Harris is also Shadow Minister for Aboriginal Affairs and Treaty.

Paul Freeman said the transition marks a significant milestone for the company.

“Being formally recognised as an indigenous company will be an enormous benefit to our long-established government clients who are required, as part of the Reconciliation Action Plan, to spend a percentage of their outsourced project funds on indigenous businesses,” he said.

While there are no plans to rebrand the company, Freeman intends to offer employment opportunities, scholarships and traineeships to young indigenous people on the Central Coast, home to one of Australia’s fastest growing Aboriginal populations.

“We aim to work closely with Bara Barang through their employment, training and career pathway programs, which connect young Aboriginal people on the Central Coast with the right employers in a culturally sensitive way,” he said.

“I am proud to be Aboriginal and believe it is a wonderful legacy to leave to my children and grandchildren.”

Source:
Media release, Nov 11
A Way With Words for E-Bisglobal