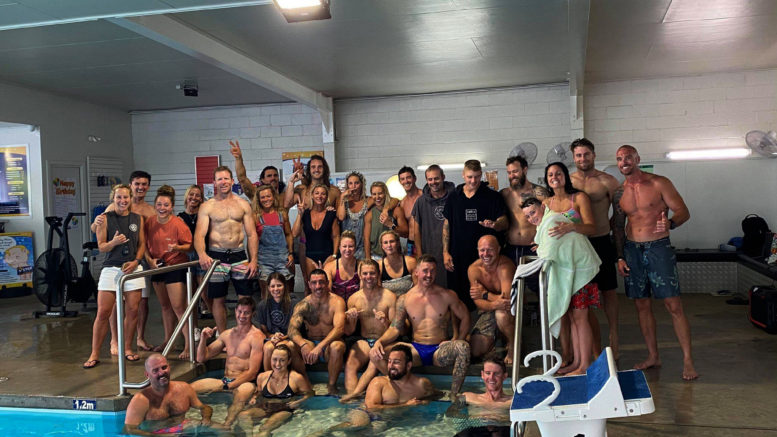 It was hard not to hear a joint sigh of relief at The Collective Gym in Erina on November 22, after members completed a gruelling 16-minute WOD (workout of the day) to raise money for Movember.

The workout, organised by two of the four co-owners of The Collective, Troy and Kasey Paul, and gym member, Daniel Di Loreto, was held at the Erina Swim Centre and inspired by the Swim’n’Stuff workout from the 2020 CrossFit Games.

Di Loreto said they raised a total of $1000 from the workout and sausage sizzle held after.

“The day was absolutely amazing, and the event went off without a hitch, thanks to the amazing group of participants and volunteers who gave up their Sunday,” Di Loreto said.

“All of us at the gym love exercising, and we love supporting each other, so why not combine the two and raise some much-needed funds for a good cause.

“Some of the boys in the gym formed a Movember group, and it was the perfect way to get behind them and help boost their amazing fundraising efforts.”

The 16-minute workout was separated into four rounds, with all 24 contenders racing against the clock and each other.

Each round consisted of 10-12 (female/male) calories on the Echo Bike (air bike), followed by a 25m freestyle swim, 10 diamond sit-ups, and 10 overhead ball slams, all done within a four-minute time cap.

“Everyone had a great time, but they did say the workout was horrible,” Di Loreto said.

“A few participants dubbed the area around the Echo Bikes ‘carnage corner’, as when they finished the last effort on the bike to complete the workout, they collapsed on the floor – there were bodies everywhere.

“It was one of those workouts that looked bearable, but add a little competition and a time cap, and it made it so much harder.

“I had people complaining they could not move from lactic acid build-up, people laying on the ground outside, and some said it was the worst workout they have ever done.”

“Being part of a community and having events to look forward to is what we love to do, and that is something the Movemeber cause really supports,” he said.

“If you surround yourself with like-minded people, then amazing things will happen.”

The money went directly to the Movember team, The Slippery Coco Mo’s, who have raised almost $4000.

“Honestly though, the boys just love the fact they have an excuse to grow a moustache for a month (or try to),” Di Loreto said.

Students’ artwork up for auction

Fundraiser was a real mover and shaker