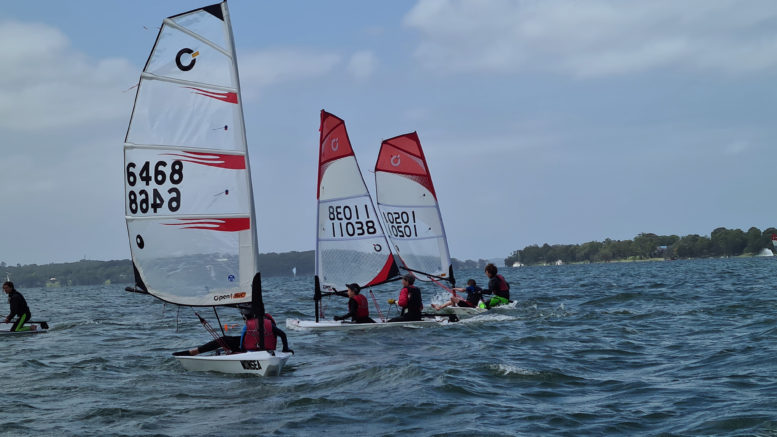 Junior sailors from around the state descended on Lake Macquarie over the weekend of November 21-22 for Mannering Park Amateur Sailing Club’s fifth annual Dolphin Chaser Regatta.

Open to sailors of all skill levels between the ages of 8 and 18, the regatta is the culmination of the sailing club’s junior development program, and combines competitive racing with fun water games, and serves as the embodiment of its motto ‘sailing for fun’.

Andrew Whitbourne is the sailing club’s Training and Development Coordinator and he said that despite the challenges posed by COVID-19, Dolphin Chaser 2020 had been a resounding success.

“We had 45 entries this year, which is not too far off our standard numbers, so that was really pleasing to see given the pandemic,” Whitbourne said.

Started as a means of introducing club juniors to the wider world of sailing, Whitbourne said the interaction between juniors from various clubs that the event fostered helped competitors develop their sailing skills and confidence.

“During the racing portion of the regatta, the golds and silvers compete within their divisions, while the greens enjoy off the beach sailing games.

“There’s also a variety of activities where the fleets are all mixed up so that the kids can intermingle and learn from one another in a fun way,” Whitbourne said.

One such mixed event is the regatta’s namesake, the Dolphin Chaser, where dozens of numbered inflatable dolphins are released onto the lake and teams’ race to collect the ones that match their assigned number.

Whitbourne said these types of interactions were especially important for forging new friendships among Australian sailing’s next generation, and believes such relationships are the key to the sport’s longevity.

“The regatta is a natural expansion of our junior development program and our way of encouraging the kids to make new friends.

“It’s our way of expanding their view on sailing and showing them there’s a whole wide world out there with lots of interesting people if they stick with it, and it’s the club’s hope that more kids will stay in the sport if they see that there are other kids their age enjoying it too.

“Afterall no one wants to do things by themselves, so the more kids you get involved, the more likely they’ll be to stick with sailing.”