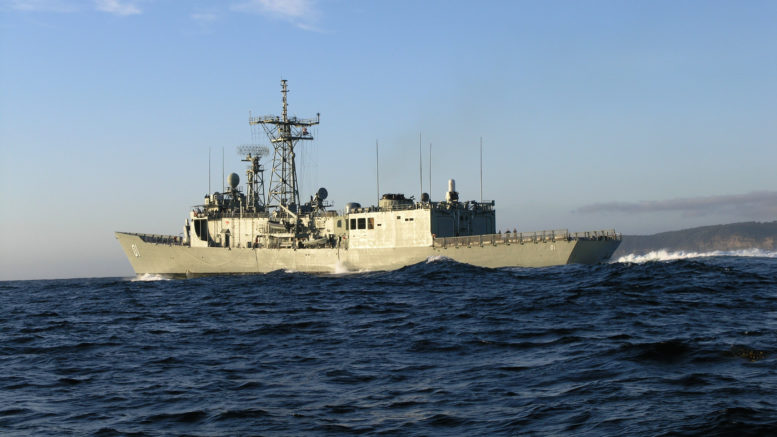 HMAS Adelaide off the Coast near Terrigal in 2008

With November 15 marking the 40th anniversary of the commissioning of HMAS Adelaide, Central Coast Artificial Reef Project (CCARP) has paid tribute to the crew of the former wartime vessel, which now lies peacefully beneath the waves south east of The Skillion at Terrigal as an artificial reef.

Spokesperson Sue Dengate said had it not been for COVID and state border closures, former members of the crew would have visited the Central Coast this week.

“This would have been their opportunity to reminisce about the times they had on board, remember their mates who are no longer with them and talk about the contribution the Adelaide made to the security of Australia and the remarkable achievements made in times of peace,” Dengate said.

Just some of the contributions the Adelaide made as an escort frigate included area air defence, anti warfare, surveillance, reconnaissance and interdiction.

“The ship was commissioned on November 15, 1980 – the first of six Adelaide Class guided missile frigates to be delivered to the Royal Australian Navy,” Dengate said.

“Adelaide (II) was the second ship in the RAN to carry this name.

Since 1990, the Royal Australian Navy has conducted maritime security operations in the Middle East region, which remains strategically important to Australia’s economic and trade interests, with the Adelaide taking part in Operation Catalyst in 2004-05, Operation Slipper in 2001-02 and Operation Damask in 1990.

Other important operations in which the ship was involved included a phased withdrawal of Australian citizens during the 1997 coup d’etat in Fiji; the rescue of Thierry Dubois and Tony Bullimore from their stricken yacht in the Southern Ocean after seven days of searching in 1997; and the 1999 East Timor peacekeeping taskforce.

The Adelaide was decommissioned in 2008 and had to sail from Perth to Sydney with a skeleton crew prior to preparation work that had to be done for scuttling.

“We had heard that it was within the Captain’s power to deviate from course a bit and we sent a message to him asking if he could bring the ship to Terrigal to show the locals what they would be getting,” Dengate said.

“At sunrise on January 28m, 2008, HMAS Adelaide sailed into view on the horizon, south-east of Cape Three Points.

“To our delight and surprise, the Captain brought her in so close that she was almost in Terrigal Haven, surrounded by a flotilla of small boats.

“We would dearly love the new Adelaide (HMAS Adelaide 3) to come to Terrigal and do a float past over the ex-HMAS Adelaide artificial reef; what a spectacle that would be.