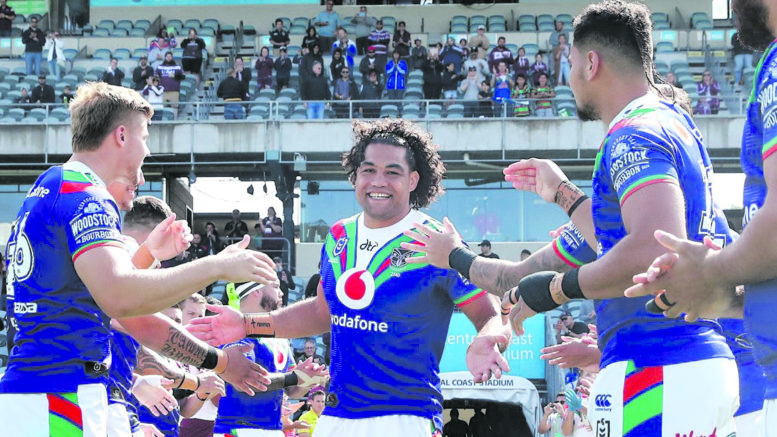 Adam Blair in his farewell game for the Warriors

There was already a lot of love for the NZ Warriors NRL team on the Central Coast after a very difficult season in which most of the players have been away from their friends and family for almost six months.

And so, it was not surprising when the Central Coast Stadium crowd rose to their feet for a standing ovation for the Warriors when they took to the field on Sunday afternoon for their final game of the season against the Many Sea Eagles.

But the love quickly escalated to euphoria when the Warriors overcome a 0-10 deficit early in the game to tear the Sea Eagles apart 40-28 in a fourteen try extravaganza (no win, of course, is ever as satisfying as a win over Manly).

Coach Todd Payten paid tribute to retiring star Adam Blair who played his 331st and final NRL match and his teammates marked the occasion by performing a very emotional Haka.

“I had a little tear well up when I saw the Haka,” Payten said.

“It’s really powerful, it’s a sign of respect – I’m really proud of our club and this group.

The Warriors finished in 12th place on the ladder this season and have produced some outstanding footy at times, albeit inconsistently.

They have been adopted by NRL fans on the Central Coast this year and have earned great respect and admiration across the community during their time here.

Have your say on rezoning of stadium site