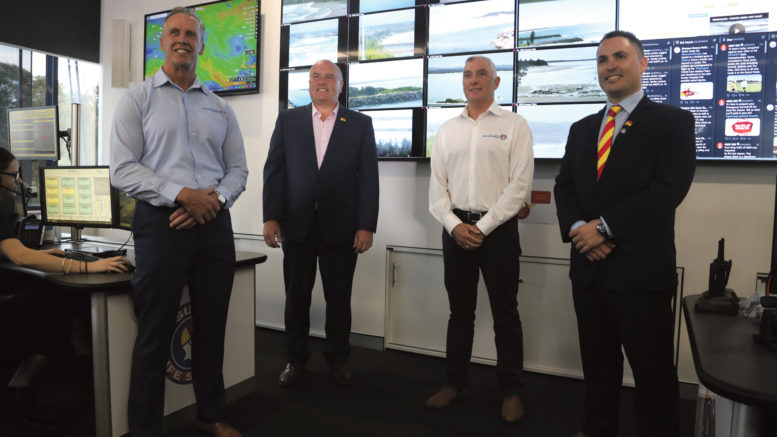 Beachgoers can now feel even safer this summer with the opening of the new State Operations Centre (SOC) in Sydney acting as a backup emergency service for all Central Coast and NSW lifeguards.

“We will now be able to communicate regularly with the Central Coast lifeguards and monitor their channels, and also talk directly with them and coordinate a response if required,” he said.

“We have state-of-the-art radio, telephone, video and IT services allowing us to have situational awareness of what is going on up and down the coast at any one time.

“It’s the communication and coordination hub of all surf lifesaving activities across the state.”

When an incident occurs on the Central Coast, he said those at SOC can monitor the cameras and situation, contact the closest assets in the region, and coordinate with the local duty officer on the conditions faster than ever before.

The $500,000 centre was officially opened by the NSW Minister for Police and Emergency, David Elliott, as part of a $16M investment into Surf Life Saving NSW over the past four years.

“The 20,000 active surf lifesavers in NSW play an important role responding to emergencies, and it is pleasing that they will now have the most up to date facility to assist them,” Elliott said.

The SOC was designed in consultation with other NSW emergency service organisations including the Rural Fire Service and the State Emergency Service.

Recent multi-agency emergency responses – including the response to the NSW bushfires in January – also helped inform the design of the new centre.

“With near-record drownings last summer and a very significant increase in boating fatalities, it’s vital that our lifesavers have the best communications and emergency coordination technology available to help save lives on the beach and the water,” Pearce said.

“We saw an unprecedented increase in emergency callout operations and requests for assistance over winter, and as the weather warms, the beaches are only going to get busier.”

The SOC can also coordinate multi-agency responses with other NSW emergency service organisations, including NSW Police and ambulance, 365 days a year.

Last year it made 438 calls for an ambulance and responded to 602 requests for assistance to coastal incidents and emergencies from the police.

Businesses encouraged to connect with advisors