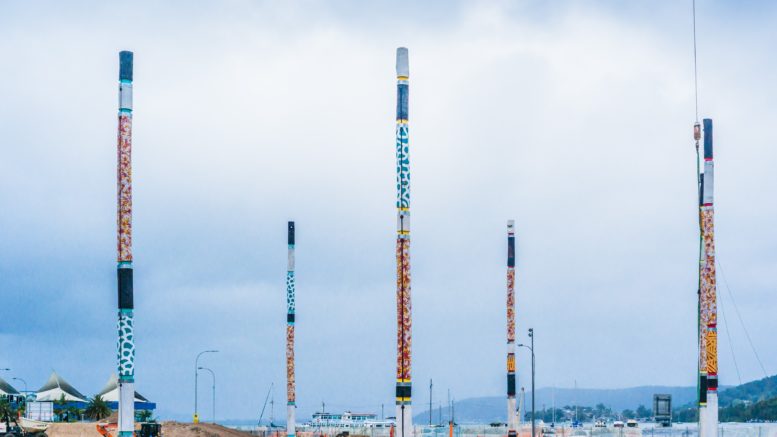 The first cultural element has been installed at Leagues Club Field in the form of large timber poles decorated with traditional Aboriginal art.

They are the first of many elements to be incorporated into the Gosford waterfront park’s $10M transformation.

The poles – carved, scorched and painted by local Darkinjung artists – are the result of a successful collaboration between the Hunter and Central Coast Development Corporation, landscape designer Turf Designs and the Darkinjung Local Aboriginal Land Council.

Parliamentary Secretary for the Central Coast and Member for Terrigal, Adam Crouch, said Leagues Club Field had been designed with a common goal of sharing and celebrating local stories of the Central Coast’s heritage and Aboriginal culture.

It will feature picnic areas, play equipment, a sporting field, pathways and a tidal pool.

The poles represent the Aboriginal peoples of the Central Coast and will surround the park’s cultural centrepiece – a circular community gathering space based on a traditional dancing ground.

“Students from Chertsey Primary School in Springfield were also able to make a permanent mark on the site, with their handprints stenciled onto the 11-metre poles.”

The park is expected to be finished later this year, with hundreds of plants and trees to be planted in coming weeks.

Carving of sandstone animal islands will also begin shortly, along with the installation of barbecues and picnic amenities.

In defence of libraries