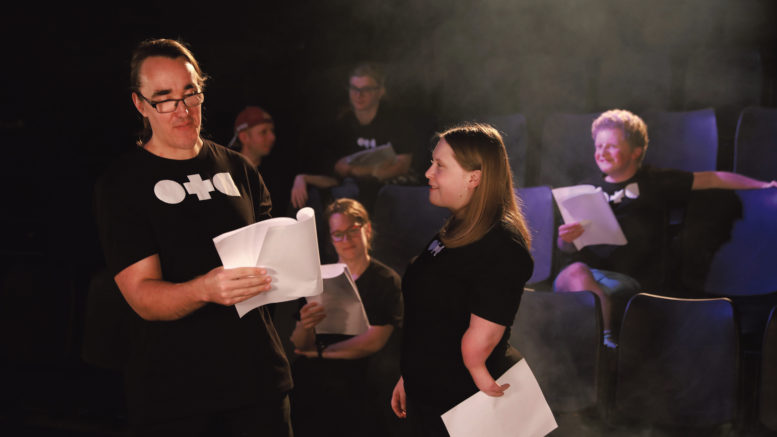 Tuggerah’s Options Theatre Company describes itself as ‘a living, breathing, theatre training facility with a company of creatives, actors, technicians, musicians, directors, dancers and artists, who happen to be people with disability.’

In operation for almost 10 years, the company has become known for its annual shows performed to sold-out audiences, with a full year program of interactive creative arts training.

But when the coronavirus put an end to all that in March, Artistic Director, Stuart Smith, and his team were forced to think outside the box.

What they came up with was The Friday Show, an interactive online variety style program put together by the creative team and enjoyed by members from the comfort of their own homes during nine weeks of lockdown.

So successful was the format, that the company now has some ambitious plans to expand it, courtesy of a $50,000 grant from the Newcastle Permanent Charitable Foundation’s special COVID-19 grant round.

“It was put together through the week by myself, Musical Director, Andrew Samford, Assistant Artistic Director, Carolyn McNamara, and others from our creative team with input from company members.

“We came up with an hour and a half of entertainment each week, featuring suggestions from, and crosses to, the wider membership and with a few surprise guests.”

“Through the process, we learnt how to make a TV show and we thought it would be fun to develop it further into a web program, with ideas, script input and performances coming from the company members themselves,” he added.

While Smith was tight-lipped about where and when the new look program will air, he did confirm preproduction was well underway.

“Right now, we are turning our space into a TV studio and soon we will be buying cameras, lights and other equipment, and starting to build a set.

“As a group, we have started writing the script for a show comprising 15-minute episodes about a theatrical society which has to adapt to a changing world.

“In this case, the catalyst will be what we are calling the Greatest Depression.

“It really will be art imitating life.”

Smith said the company hoped to have a pilot completed for a screening somewhere on the Coast towards Christmas.

He said while the company itself had been established 10 years ago, many of its members had been studying theatre for almost 20 years.

“Our members don’t want to see able-bodied people playing disabled characters in mainstream entertainment, they want to be playing those roles themselves,” he said.

“It doesn’t matter if you have a disability or not, if you have spent years building your skills in stagecraft, you want to be taken seriously.

“Many of our members have already secured professional work and that’s starting to make a difference.

“Their successes make others realise that it’s not a pipedream.”