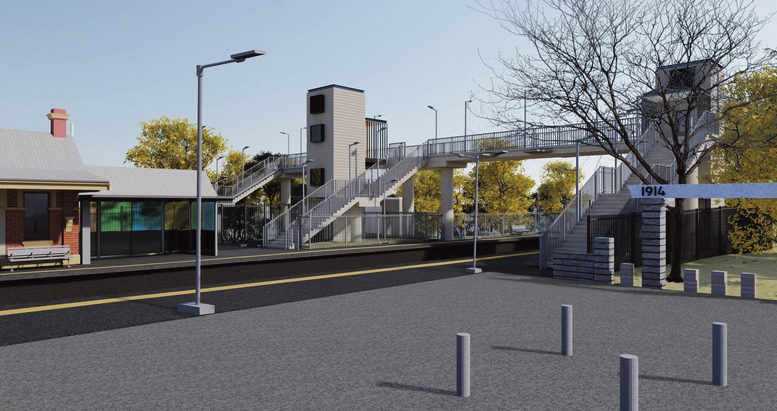 An artist’s impression of how Ourimbah station will look

Parliamentary Secretary for the Central Coast and Member for Terrigal, Adam Crouch, said the multi-million dollar upgrades include new lifts and improved access.

“Following the delivery of a piling rig on October 1, a large mobile crane and piling rig laid the foundations for the new lifts at Ourimbah which will provide access to the footbridge and platforms, making it easier for less mobile customers,” he said.

“One tree was removed to make way for the lift on the Pacific Hwy side of the station.

“Landscaping work will take place around the station precinct to offset the loss of this tree.

“Transport for NSW has been working with the Ourimbah RSL Sub Branch to ensure the project does not impact the WW1 Monument and Memorial Garden, and that cleaning and restoration of the existing Monument will be undertaken.”

Piling work for the new lifts and the relocation of electrical services also took place at Niagara Park station on the weekend, as did investigation and site establishment work at Narara and Lisarow Stations.

“Each of these multi-million dollar projects will make it easier for everyone to access the stations, including people with a disability or limited mobility, parents and carers with prams and travellers with luggage,” Crouch said.

The NSW Government committed to install lifts at Ourimbah, Lisarow, Niagara Park and Narara, as well as up to 220 car park spaces and a lift at Tuggerah at the 2019 State Election.