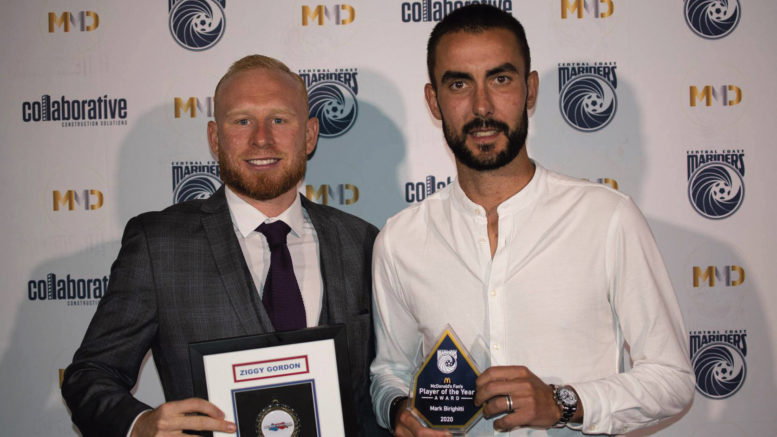 Mariners’ goalkeeper, Mark Birighitti, has added his name to a prestigious list, claiming the 2020 Mariners’ Medal after a strong debut season in the Yellow and Navy.

The 2020 Mariners’ Medal dinner was a stark contrast to previous years, presented on a smaller scale at Mingara Recreation Club, in compliance with COVID-19 protocols and with only players, club staff and club partners in attendance.

Birighitti arrived from Melbourne City during the off-season in 2019 and quickly established himself as a bona fide number one in Gosford, making a number of stunning saves throughout the campaign, including his heroics in the FFA Cup that sent the Mariners into the quarter finals.

The 29-year old made more saves than any other goalkeeper in the competition, with 99, and on Thursday night,October 1, was also recognised by his colleagues as the Player’s Player of the Year, as well as the McDonald’s Fans’ Player of the Year.

Scottish defender, Ziggy Gordon, picked up a couple of honours, awarded the Official Supporters’ Club Player of the Year for his efforts throughout, as well as receiving the Men of Football Damien Brown Medal.

After a big first season at senior level, Gianni Stensness, was awarded the Yellow and Navy Foundation Newcomer of the Year award and also took home the Noel Spencer Goal of the Year gong for his bicycle kick effort in Round 21 against Western United.

This year’s Golden Boot Award went to Milan Duric, while Dan Hall took out Y-League Player of the Year.

The Central Coast Mariners’ Chairman’s Award was presented to Cheyanne Pay, the Club’s event coordinator, who assumed the role of Covid Officer during the restart to ensure that players and staff could finish the season safely.

Volunteer of the Year went to Caroline Sutas.