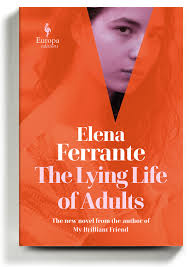 This is a coming of age story about Giovanna, a twelve-year-old girl growing up in Naples, the good part of Naples.

She lives in an apartment with her parents, who are teachers and intellectuals.

They encourage Giovanna to speak Italian, to read, to be successful in school: “Study until you remember everything”.

Her parents are friends with Mariano and Costanza, and Giovanna is good friends with their daughters, Angela and Ida.

The families are close, they often dine with each other, even go on holidays together.

But life for Giovanna comes to an abrupt halt when her mother speaks to the teachers and learns she is not doing well at school.

Her mother blames the changes that come with early adolescence, but according to her father: “Adolescence has nothing to do with it: she’s getting the face of Vittoria.”

Vittoria? She is Giovanna’s aunt, her father’s sister, and such a remark might be innocuous, however Giovanna grew up with her father saying of his sister that there: “ugliness and spite were combined to perfection.”

Up until that remark, Giovanna thought she was pretty, how could her father, who loves her, say such a thing?

Giovanna has never met her aunt, “the childhood bogeyman, a lean, demonic silhouette, an unkempt figure lurking in the corners of the houses when darkness falls.”

However, now she becomes obsessed with locating Aunt Vittoria and seeing what she looks like.

Much to her parent’s dismay, Giovanna locates Vittoria, in a part of Naples that she is unaccustomed to and the two form a relationship.

This will cause Giovanna’s life to take an unexpected trajectory.

Giovanna finds out that Vittoria had given her a bracelet when she was born but there is no evidence of this.

Turns out Giovanna’s father knows about the bracelet – oh boy does he.

It opens up a Pandora’s box – Giovanna’s parent’s relationship becomes fractured, her friendship with Angela and Ida becomes strained, she will rebel and lie and manipulate.

Does she do this because that is what the adults in her life do?

Is this all part of growing up?

There has been a lot of buzz about this book, it has been shortlisted for the 2020 Kirkus Prize, is a New York Times bestseller and has been bought by Netflix to be made into a series.

The reviews are great.

I am not really a reviewer – I am just simple reader of books and so I have to ask, what am I missing here?

If it is about the moral pitfalls of lying or some existential blah blah blah, I don’t care.

I just want to read a good story.

What all the buzz is about I couldn’t quite tell.

Half way through the book I stopped caring what happened to anyone because I stopped liking everyone.

I found the characters basically pathetic with no redeeming qualities.

I became really tired of reading the word ugly, of people calling each other ugly, calling themselves ugly.

Maybe it is the Italian way or maybe it was the translation, but it was overused.

The story seemed to take too long and really didn’t go anywhere.

I read the Neapolitan Novels and particularly enjoyed My Brilliant Friend.

If you want to read a book by Elena Ferrante, I suggest you read that one instead.

Turned on its head theatre experience at The Art House

Budgewoi masterplan to be reviewed