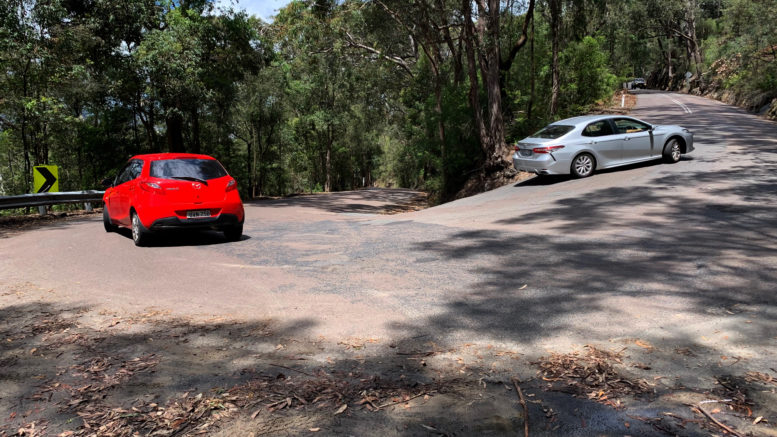 Somersby resident Greg Hooper is stepping up his push for a road at West Gosford to be declared eligible for a Black Spot funding fix.

Hooper says he has been agitating for improvements to Debenham Rd South for years and has appealed to Central Coast Council, police and State Government to address the situation.

“This road has become a major thoroughfare and is frequently used by big trucks,” Hooper said.

“It is an accident waiting to happen, with vehicles speeding around the hairpin corners on this very narrow road.

“I have seen cars skidding to a halt and I have seen drivers taking unnerving risks.

“In August one truck skidded into the fencing on the side of the road, causing a diesel leak which closed the road.”

Hooper said the road was also subject to rockfalls, which sometimes take days to clear.

“From discussions with community leaders over three years, they agree with me that this would be the most dangerous section of road on the Central Coast,” he said.

Hooper said specific problems include a sign at the base of the road adjacent to Koala Crescent being obscured by tree branches and constant use of the road by trucks of over 3 tonnes.

He said there is a pot-hole of around 70 cm in length, 30 cm wide and around 15cm deep on the first blind corner.

And drivers often use excessive speeds, he says, with a collision inevitable.

Hooper said a petition was being organised by concerned residents anxious to have the road listed for Black Spot funding.

But Councillor Chris Holstein said the road, once a major thoroughfare into Gosford, had been superseded by two upgrades to Central Coast Highway and usage should be restricted to residents and emergency access.

“Debenham Rd Sth has been brought up to a minimal standard but to get this road up to standard (to cope with large volumes of traffic), would cost huge amounts of money,” Cr Holstein said.

“I think the answer lies in increased signage and more monitoring by police.”