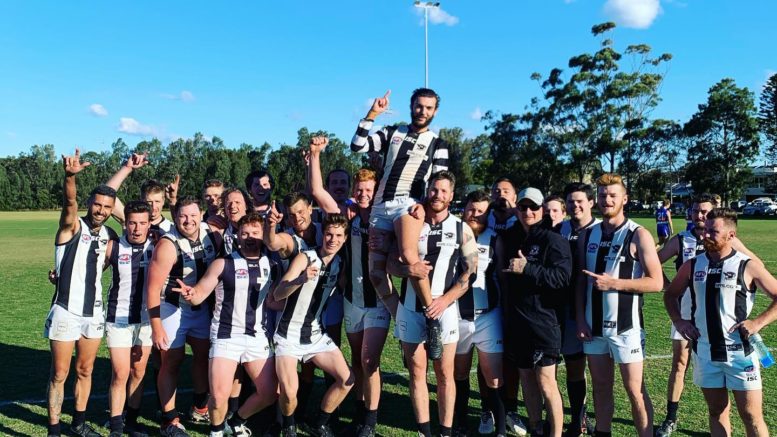 With player availability issues impacting their play this season, Club President, Simon Wood, said the Magpies went into the match keen to improve on their performance over the last weeks and to celebrate a milestone for club veteran, Carter Jones, who was running out for his 200th game with the Pies.

“The opening quarter saw a slow start by the Pies who were against a strong wind, but then the penny dropped and the guys turned it on, kicking two goals to complement our first from, Nathaniel Lander,” Wood said.

Heading into the second quarter down 29-18, the Magpies entered with gusto, but sadly the second and third quarters would prove to be their undoing, with the Bulldogs piling on the points to lockdown an insurmountable lead heading into the fourth.

“Unfortunately, quarters two and three did not resemble our vibe, with the boys letting Warners Bay in for some easy goals and finding themselves flat footed.

“With the score going into the last at 100-21, it was all about running out the game and building some pride back and momentum to go into next week’s game,” Wood said.

A last ditch effort from the Pies saw them pad their scoreline before the final whistle, but it was not enough to bridge the points gap, with the focus on their last game of the season to be delivering more consistent play every quarter.

“Unfortunately playing just two quarters of decent footy in this league does not win you games, and the boys will work on that and go into next week’s game against Maitland determined to finish off what’s been a tough season, with a win at the Don.

“Special mentions to Blaine Nelson and Keaton Jones, who had a great game before both leaving the field due to concussion, and Deacan Lander, who was also having another cracker of a game before suffering a knee injury.

“Blake Lester battled hard in the ruck for most of the day and had a great game also,” Wood said.