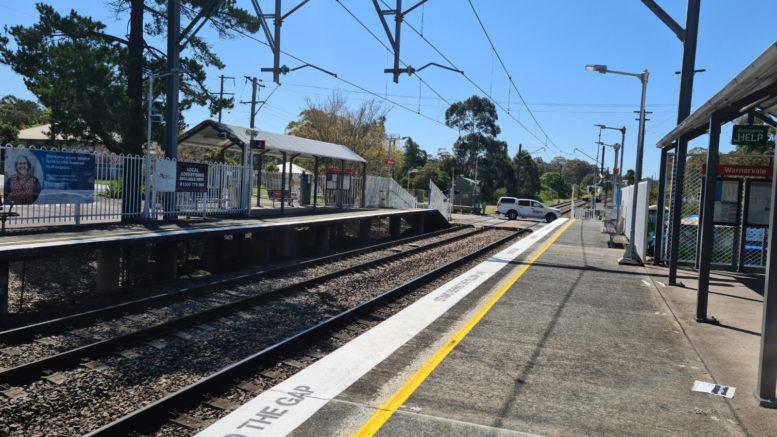 Make a decision now on a new or upgraded train station for Warnervale, says Cr Kyle MacGregor, and create certainty for both commercial and residential development in the area.

He said he had no particular view on what was better, a new station or to upgrade the current one, he just wanted one or the other.

“For roughly two decades, existing and future residents of the greater Warnervale area have been expecting to see the development of the Warnervale Town Centre, Wyong Employment Zone and the Warnervale Train Station,” Cr MacGregor said.

“Ever since the Liberal National State Government cancelled the delivery of the Warnervale Train Station early into their first term, there has been great uncertainty about the future of rail infrastructure in the area, and this has impacted on both commercial and residential development in the area.

“Residents have moved into the area on a promise that these things, particularly the train station, would be delivered for them.

“After nearly ten years of Liberal National rule in NSW, we have an existing station that is crying out for improvement, no new train station, as well as trains that are running slower and stopping less often at Central Coast stations.”

He was successful at the council meeting to get a resolution passed requesting CEO, Gary Murphy, to write to, Andrew Constance, Minister for Transport, for an update on the State Government’s plans for the Warnervale train station.

Councillors will be briefed on any response to the letter on the future of Warnervale train station and its implication for both the Warnervale town centre and the greater Warnervale region.

MacGregor said a wholistic approach to the planning and delivery of the residential and commercial real estate as well as the associated jobs, services and infrastructure was essential to the success of any suburb.

He said the Coast had seen decades of Ad Hoc planning and stunted economic investment and growth had continued to fail the region, time and time again.

“After years of stagnation and delay we are starting to finally see movement on the town centre and the Wyong Employment Zone,’’ he said.

“Council and the private sector have been proactive in taking steps to engender developments in these strategic areas.

“However, one last stumbling block for all parties is the issue of the ‘new’ Warnervale Train Station.

“This is all the more glaring when stations in Liberal party target seats from the 2019 election are receiving upgrades as we speak, while they have left Warnervale to lie in wait, with no publicly known plans for improvements to the station.

He said both Council and local residents needed certainty over the future of the Warnervale train station.

“If the Government has no intention of delivering this essential infrastructure, they should be upfront with the people of Warnervale and the Central Coast.

“There is nothing that council is doing to hold back the delivery of this station, it is simply a lack of political and economic will from the State Government that has got us into this situation.”

He said locals were forced to use Wyee or Wyong stations rather than their local station, dislocating communities and adding valuable time to workers’ daily commutes, which were already long enough.

“Given the need for economic stimulus and public investment to drive economic growth and recovery through this recession, there is no better time than now for the State Government to get to work on the delivery of a new Warnervale train station to cater to the needs of a hastily growing region, given the town centre and future commercial and industrial growth in the greater Warnervale area.”

Airshow to feature a wide variety of aerobatics and displays