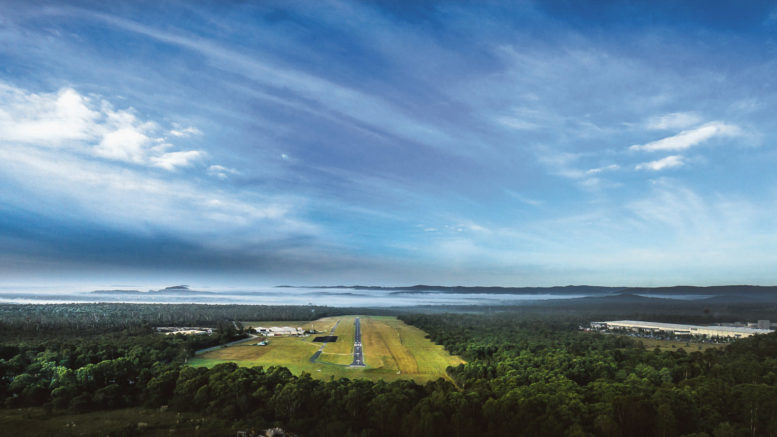 Community activists both for and against Warnervale Airport have challenged Central Coast Council decisions at all levels, says a newly public report.

The review was conducted by independent consultants, Morrison Low, who concluded that Council had followed the Local Government Act principles throughout the course of its decision-making processes, including the requirement to include significant projects in their integrated planning and reporting documents to enable community engagement.

“The principles imply that a council may not always be able to accommodate the entire community’s wishes but should act in the best interests of the community as a whole,” the review summarised.

“In following the Act’s requirements, Council has adhered to the principles in accordance with good governance expectations.”

One area where legislation was breached, was the urgent maintenance works at the Airport

that were undertaken in 2015, which infringed environmental regulations and ultimately

“This is well documented,” the report said.

The Council was fined for the environmental breach but denied it had triggered the WAR Act until it more recently sought legal advice confirming that this breach was likely.

The report said that Council resolutions showed that when it became aware, it took immediate steps to ensure compliance and the Act is the subject of an ongoing WAR Act review.

“The great majority of the processes surrounding the events are robust and what we would normally expect to find in council internal and public processes of this kind,” the report said.

“Council’s role is to advocate and facilitate the wellbeing and priorities of its community through setting a clear vision and actively delivering aspects of it.

“These issues and debate are driven by passionate individuals who have strong views one way or the other, but ultimately, Council must make democratic decisions in accordance with statutory requirements as it sees fit.

“The Council was faced with an active and assertive campaign from individuals and two groups challenging Council decisions at all levels.”

The Report reviewed a large body of information relating to: the project to establish a regional airport at Kiar Ridge, the development of an Aviation Hub at Central Coast Airport and any activities, including works and development applications lodged by the current Council or the former Wyong Council relating to works at the airport site; and, processes and decision making relating to the airport and Wyong Employment Zone.

The review concluded that it would be impossible to gain a full understanding of events without a complex and expensive investigation process.

It said that almost all of the key stakeholders in the negotiations and investigations that Council undertook, as well as the decisions pre-2018, were no longer part of Council.

“The specific processes where we could not find sufficient information to complete a robust review are: the land purchase from Terrace Towers; urgent runway maintenance in 2015; and, application of some Council instructions.”

The Morrison Low report concluded that further investigation would be difficult due to gaps in council records dating back to the former Wyong council era.

“If Council chooses to proceed with phase 3, we are of the view that any investigation would be difficult for a number of reasons.”

The review recommended that council, in future, should avoid creating mistrust.

At its August 10 meeting, Council referred the Review to the Audit, Risk and Improvement Committee for their consideration at their next meeting in October, and requested the Chief Executive Officer to consider the proactive release of a redacted version of the Review on Council’s website, in line with the Government Information (Public Access) Act 2009.

At the same meeting, Council resolved to change the name of the Airport to the Warnervale Aircraft Landing Area (ALA).

In February 2018, Council resolved to release a number of documents relating to the future development of Wyong Employment Zone (WEZ), including the Warnervale Airport.

These documents, and documents subsequently released after third party consultation, are included in this proactive release.

After consulting with the relevant parties and considering the appropriateness of release, the Acting CEO decided on May 25, 2018, not to release two documents at that time.

Council said that various documents relating to daily movements at the landing strip from July 2019 to current were released earlier in the year along with all the previously released documents, including those that had been available on the previous Wyong Council’s website.

A number of documents relating to the proposed Local Environment Plan for Warnervale, Education and Business Precinct at 30 Jack Grant Ave, are available on the Department of Planning and Environment website.

The latest document is a letter from the Department of Planning and Environment dated May 28, 2018, noting that Council has withdrawn the proposal.

A copy of the redacted Morrison Low Confidential Warnervale Airport Report can be found by searching ‘proactive release’ on Council’s website.

Andrew Smith, from the Central Coast Aero Club (CCAC), which operates from the Warnervale ALA, said It was very disappointing that Council’s actions caused the triggering of the movement cap in the WAR Act.

“The CCAC is the only party harmed by that,” Smith said.

“However, it appears that the recent decision of the State Government to repeal that section of the Act, to be followed by repeal of the full Act, assuming that it gets through the Legislative Council, has addressed this issue.

“We have been informed by Council that the cutting of the trees near the approach to the runway will likely be attended to in a ‘matter of weeks’.

“We can only hope that their estimate is correct so that we can soon again enjoy the full length of the runway and enjoy the safety which should be afforded under normal circumstances to our staff, students, members and visiting pilots.”

Smith said that the internal audit of airport matters essentially highlighted what it knew all along, the community want their airport to remain, they want its permanence strengthened and for it to allow for job creation.

He said 2/3rds of respondents to the invited community submissions favoured growth of the airport, the majority of the rest wanted to retain the airport as is.

Only 10 per cent of respondents thought the Airport was unnecessary.

“There is a clear and unequivocal desire in the community to retain and grow our only aviation asset.

“The CCAC believes that this now puts to bed any residual negativity surrounding the Airport and looks forward to fruitful discussions with Council over how we can work together to strengthen the Airport site and build on its great foundations to create a true Central Coast Community asset.

“Any more retrograde discussions of previous Councils and how they managed the site is simply a colossal waste of Central Coast ratepayer funds and Council staff’s valuable time and energy.

“We now have both the State Government, Council’s own internal audit and the will of the community aligned with a common aim to protect this essential piece of infrastructure as an aviation asset for the future of the central Coast.”

NSW Government accused of “political engineering” of issues at the Airport