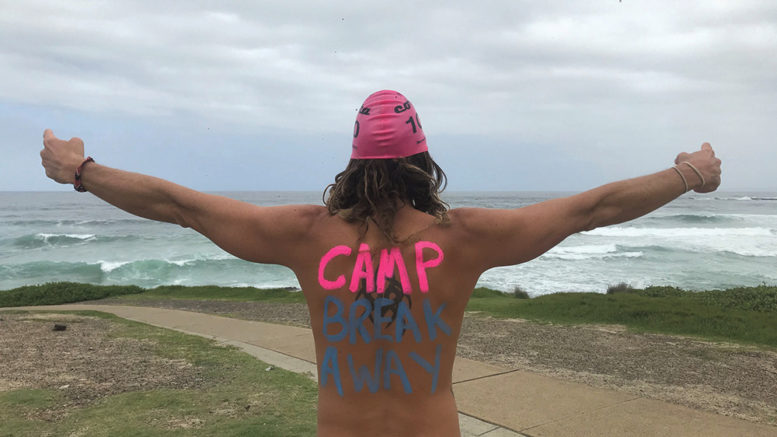 On a mission to raise funds and awareness for San Remo based respite care provider, Camp Breakaway, Dorf and a handful of brave mates hit the surf at Catherine Hill Bay Beach from sunrise on Saturday, September 12, with the goal of completing a 45km journey to Avoca.

Unfortunately for Dorf, things didn’t quite go to plan, with technical difficulties and mother nature cutting the grand voyage short at around the 20km mark.

Increasingly worsening conditions including a persistent north easterly, were the major downfall of the paddle, with fuel issues among Dorf’s all-important support team also causing issues, and eventually leading to the abandonment of the event when the party arrived at The Entrance.

Sore and nursing a bad case of salt mouth, Dorf said the failed run had taught him many lessons, all of which he’ll be applying in the lead up to his gargantuan 100km Bondi to Budge Big Swim planned for December.

“I’ve learned that we’re going to need a hell of a lot more planning for the Big Swim and part of that is realizing that mother nature is boss and we need plans in place to deal with whatever she wants to throw at us,” Dorf said.

But despite how the paddle played out, it appears Dorf’s mission was still a success, with $2,500 raised for Camp Breakaway along with increased community interest through all the hullabaloo, budgie smugglers and pink zinc.

Support for Dorf has also exploded with the aspiring marathon swimmer receiving all manner of offers for help and assistance from the Central Coast community.

“It’s been amazing to see the community get behind Breakaway and to offer so much support for the Big Swim.

“I’ve had masseurs, baristas, supplement shops and a whole range of people offer their services.

“The generosity has been overwhelming and really inspired me to pull through,” Dorf said.

Perhaps most helpful among Dorf’s new legion of supporters is Kim Eulenstein, an all round water woman and the Head Coach at The Entrance’s world class swimming, surfing and diving pool training centre, Elite Salt Academy.

Under Eulenstein’s tutelage, Dorf has begun learning form and techniques to help ease the strain on his body as he spends the next two months building stamina for what’s to come.

“Having gotten as far as I did with the paddle, I know that I can do 20kms, but the question is, do I have the stamina to make it all the way?

“So, I’m planning a regime to build up my stamina and hopefully from there things will just fall into place,” Dorf said.

The Bondi to Budge will take place from December 4.

The Coast Paddle planned for September