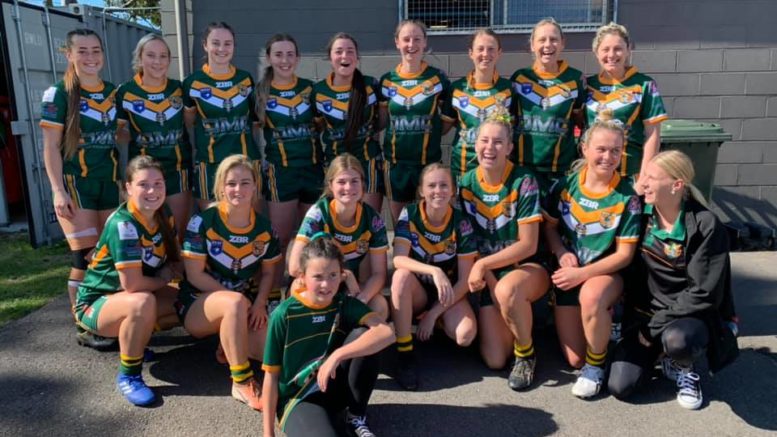 The Roos Ladies Tag recorded their best result of the competition thus far over the weekend Photo: Wyong Roos

Rugby League : The Wyong Roos joined Central Newcastle at the top of the Newcastle Rugby League’s First Grade Competition ladder in Round 3, with a last-minute 24-19 victory over South Newcastle at Morrie Breen Oval, Kanwal.

In the dying minutes, trailing 18-19, Nick O’Meley fielded a cross-field kick to score in the corner to snatch the win.

However, in Round 4, the Wyong Roos dropped to second place on scores difference after a 26-18 win over the Maitland Pickers.

The Roos had an excellent start with tries to Aaiden Wright, Cody Boyle, Wyatt Shaw and Luke Sharpe, and three Lachlan Hanneghan goals, putting them at a seemingly insurmountable 22-nil lead at half time.

But, a late resurgence by the Pickers put the Central Coast favourites on their toes, with the Pickers crossing for three tries to pile on a respectable 18 points.

However, a Kye Martin try was enough to put the Roos back into a comfortable position and they rode out the clock to a 26-18 victory, which sees the Roos retain their undefeated record for the time being.

In the Reserve Grade, the Roos have also been a force to be reckoned with.

They retained their own unbeaten streak after taking down the Pickers 60-nil, and sit comfortably atop their ladder, two points ahead of second placed South Newcastle.

In the Under 19’s, the Roos picked up their first win of the season after a 38-nil win over Nelson Bay.

The result sees them move into sixth place on the ladder and comes after a near miss against South Newcastle last round, which saw them lose by a single point.

Rounding things out, in the Ladies Monarch Blues Tag, the Roos pulled off another strong victory over Nelson Bay with a 52-nil win.

The win sees them creep into fifth place on their ladder.