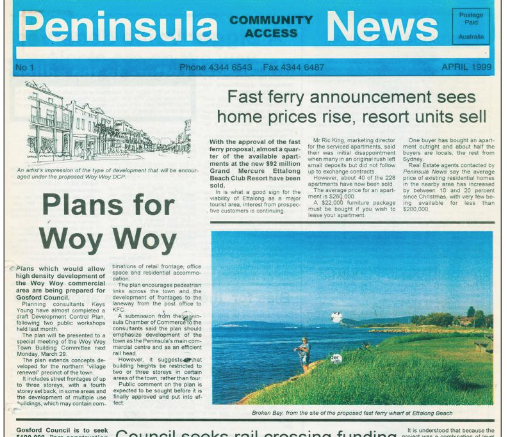 Issue 1 of the Peninsula News April 1999

Who would have thought that 21 years ago, a 12-page newsletter produced once a month would become the Peninsula’s only newspaper, outlasting many other local publications from major local, national and international organisations?

Right from the start in early 1999, there was much love for a newspaper that would focus on just the Peninsula and report in a fair, balanced and non-sensationalist manner on all things Peninsula.

The regional paper was continually painting the area in a bad light, denigrating both the area and the people. Another paper was just a catalogue with very little news at all, and certainly with very rarely any local community news from the Peninsula.

Local politicians, business and community leaders on the Peninsula were calling for a paper that they could call their own, that they could contribute to and support, knowing that it would use the information in a proper journalistic manner for the good of the community.

A paper that would report in detail what was happening in the community, include school news, hold Council and other major bodies to account, and be a voice and a forum for the community, this is what was wanted.

In response to this, along came the then Peninsula Chamber of Commerce secretary, Mark Snell, who offered his previous experience as a suburban newspaper journalist, to volunteer to start something that the area could be proud of. And 21 years later he is still volunteering.

Initially just once a month and more recently up to 40 pages every a fortnight, at least 10 hours of voluntary painstaking work goes into each issue, ensuring that the best possible product is published and distributed, with the benefit of the Peninsula always at the foremost of his thoughts.

Local businesses supported the paper with their advertising and all schools undertook to distribute copies to all students with their school newsletter.

Council and government were both extremely slow to come on board, but local politicians did so, realising that their voices would be heard in such a community-focused publication.

In the early days, there was no internet and the paper was printed on A3 sheets and physically hand delivered to a printer in Sydney.

Photographs were printed, marked up and hand delivered, emails were new, and mobile phones were only used to make phone calls, with no cameras.

The advances in technology over the period have been astronomical. There were no websites as we know them today and website creation programmes didn’t exist.

Peninsula News’ website was written and created by Mark Snell and was state of the art at that time.

Journalists were trained to do everything from day one, dealing with issues at all levels, as well as designing advertisements and creating pages.

Community volunteers took on typing and other office duties as there were very few emails and faxes were not much use for creating copy.

Community organisations were, and still are, encouraged to send in their material so that the wider community could know what they were doing and perhaps assist where possible.

The Forum pages, with letters to the editor, were popular from the start, giving people a voice for their opinions and for others to respond.

Schools were seeing their students’ achievements made public, not just in sport but also academically, much to the parents’ delight.

Local health issues were canvassed and organisations were able to promote community events that otherwise were likely to have failed.

But it was the news that people liked the most, learning about what others were doing or not doing on their behalf.

In a departure from all other main newspaper, source lines were added to each article, enabling readers to seek further detail if they wished, as well as helping them decide on the veracity or otherwise of the information being presented.

Combined, these inclusions are what made the Peninsula News so successful, so loved and supported and so well read.

There was and still is nothing else like it in the area.