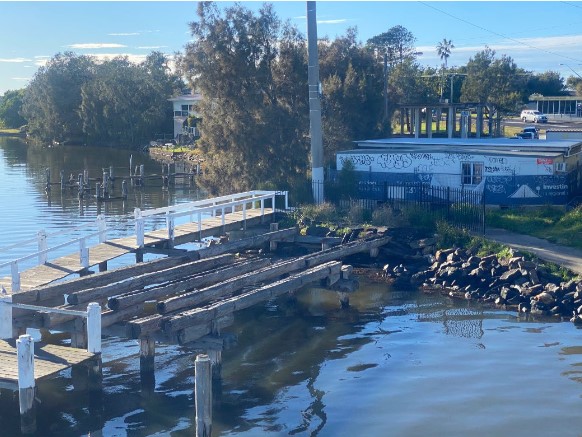 The crumbling wharf, the RMS work site and the concrete ruins in the background

Complaints of the “shanty town” appearance of the graffitied Roads and Maritime worksite, the old fish co-op and dilapidated abandoned wharf at Toukley Bridge will be a topic for discussion at Central Coast Council’s August 24 meeting.

Councillors Greg Best and Bruce McLachlan will be calling on Council to demand that the RMS and Department of Lands immediately address their responsibilities about the continuing deterioration and visual amenity around the bridge.

Also, they want the CEO to provide a thorough report on the best way forward to beautify and take more seriously this important gateway to Toukley.

In the councillors’ Notice of Motion, they list areas of community concern being the RMS graffiti-laden worksite, the concrete shell of a partial construction, the dilapidated abandoned wharf, the remnant collapsing and highly dangerous foundations of the old Toukley Bridge, the abandoned asbestos laden and dilapidated Gorokan Fish Co-op building, controlled by Department of Lands and its wharf, and the rotting seaweed removal platform and fencing.

“This long list is a failed report card on every level,” Cr Best said.

“From a visual aspect, travelling into our scenic north, it is a disgrace.

“From a public safety perspective, it is dynamite.

“I have seen large groups of children playing and jumping from the dilapidated, nail-infested foundations of the old Toukley bridge.

“We have multiple wharves abandoned in the area which are real navigation hazards, compounded by dilapidating buildings on both sides.

“Even though the Department of Lands is in the development application process to demolish the fish co-op, it’s been dilapidated for almost a decade, and even if a DA is approved, there is nothing to compel the department to immediately pull down this fibro bomb.

“There’s been plenty of Notices of Motion before, and previous legal action, against the owners of the concrete ruins on the eastern side of the bridge; so what further options are available to Council?

“On the issue of the locally known RMS shanty town, it is ironic that on the bunting around the graffitied demountables is the slogan, Investing in Regional Roads.

“I appreciate that the RMS has been conducting works under Toukley bridge for about two years, however, there is no excuse for such a poorly maintained worksite that is a blight on our community.”

Cr Best said it was a slap in the face to the community and to all the shopkeepers and business people who relied on a good impression and tried to make Toukley and Gorokan a destination.

“The most staggering observation is the rotting remnant Toukley Bridge, studded with protruding rusted nails which Council has identified as a local heritage item,” he said.

Cr Best said in stark contrast to this disgrace, across the road there was a wonderful public exercise and play area recently installed by Council.

“Also, we should not forget the extraordinary efforts by the veterans’ community to beautify and memorialise the southern adjoining park areas that the community now enjoys,” he said.

Council CEO, Gary Murphy, responded to the Notice of Motion by saying that it had legal, strategic, financial or policy implications which should be taken into consideration.

He said he would provide a report in relation to the Motion as a late item by Friday, August 21.

Meetings to be at Wyong Chambers when they resume