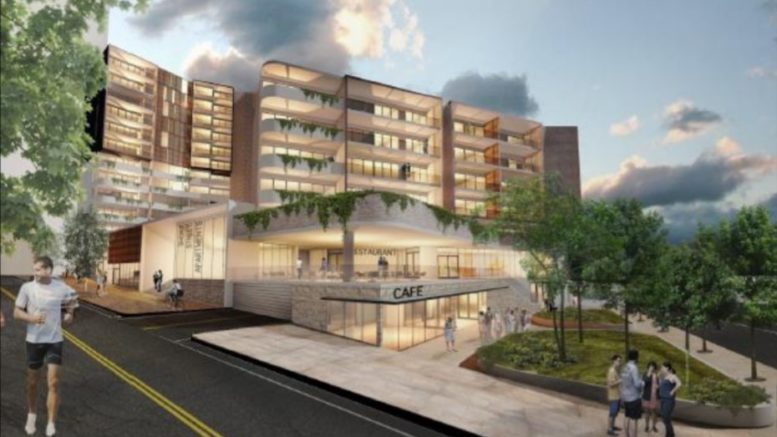 A concept image of the twin tower proposal at The Entrance

Amended plans for a twin tower residential and commercial complex at The Entrance have been submitted to the Hunter Central Coast Regional Planning Panel with an increase of units from 80 to 102.

The development application (1483/2018) by Central Coast Council was previously criticised by the Panel for its lack of detail and lack of masterplan understanding.

More information and amended plans were requested by the Panel, which was seeking a proposal that should provide a benchmark development for one of the key iconic development sites in The Entrance.

Comments made in submissions show that nearby residents are still unimpressed with the amended plans which now include 102 units in two towers above commercial and retail space and a two-storey car parking podium.

One of the towers would have a maximum height of 48.9m.

A resident of the Atlantis Apartments, on the corner of Bayview Ave and Short St, said the building would be twice as tall as Atlantis and would reduce privacy, block views to the lake and reduce access to direct sunlight.

The application addresses the overshadowing issue.

“The proposed development will provide overshadowing throughout the day on June 21 as the sun moves from east to west, however, overshadowing is unavoidable when considering high-rise development,” the Statement of Environmental Effects states.

Other submissions argued the height restrictions for The Entrance didn’t allow such a tall building.

The plan was first put forward by the former Wyong Council and twice revised since 2018.

When the Panel considered the proposal at its May meeting, Council was given until June 24 to submit additional information or amended plans, and those plans have since been open for public comment.

The masterplan is expected to go back again to the Joint Regional Planning Panel in September or October.